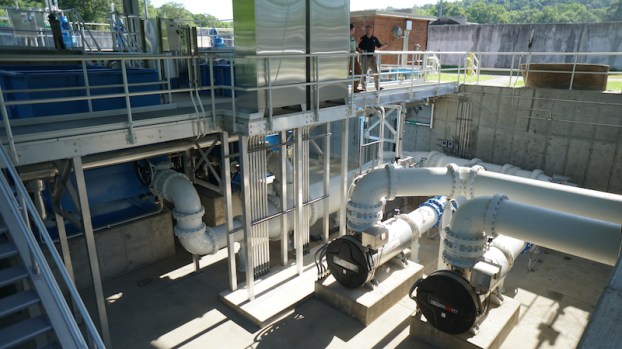 The improvements made to the Helena wastewater treatment plant that was completed in September 2017 resulted in Garver earning the Grand Award from the American Council of Engineering Companies of Alabama. (Contributed)

HELENA–A Garver-led project that helped the Helena wastewater treatment plant adhere to reduced permit limits has earned the Grand Award from the American Council of Engineering Companies of Alabama.

The project, which began in the fall of 2015 and ended in September of 2017, consisted of multiple improvements that helped the Helena wastewater treatment plant meet strict effluent discharge limits for total phosphorus. Because it discharges into Buck Creek, reliable performance and operation of the Helena wastewater treatment plant is essential to maintain the quality of this body of water frequently used by the citizens of Helena and surrounding communities for swimming, wading, canoeing and fishing.

The Cahaba River was impacted by nutrient overload and degraded water quality,” Garver Design Engineer of the Helena wastewater treatment plant project Wes Cardwell said in a phone interview. “The Alabama Department of Environmental Management identified resources and Helena is one of seven wastewater treatment plants that basically has a discharge permit modified. One that was added was phosphorus. The limit was 0.20 mg/L in 2014 and for 2022 the number for phosphorus needed to be reduced to 0.043 mg/L and that’s next to nothing and it’s extremely difficult to test that low. Our goal was to help them at the plant to meet those permit limits.”

Phase one of the project included rehabilitation of the existing secondary clarifiers, new tertiary filtration equipment, new chemical storage and feed facilities, and a new UV disinfection process. Because the existing plant hydraulics were limited, the design team had to develop a unique disinfection and post-aeration strategy consisting of closed-vessel, low-pressure UV disinfection followed by a low-profile, cascade aeration system to provide treatment regardless of downstream water level conditions in Buck Creek.

“Even though we say this project has multiple phases, there is not going to be another project,” Cardwell said. “What Helena chose to do is to meet current requirements. There won’t be another phase unless the Alabama Department of Environmental Management says there needs to be.”

Choosing to build in a multi-phase approach rather than construct all at once actually helped save the city of Helena approximately $12 million.

“One of the things that’s cool that we did is first, we assessed what the plant had,” Cardwell said. “We were physically on site and did an assessment to see what they already had and what we could already use. It didn’t make sense to demo everything and start from scratch. We came up with a multi-phase plan rather than construct everything at once. The plan was to first construct improvements to meet the 0.20 mg/L. It was going to cost $20 million to construct everything at once but because of the multi-phase approach it was reduced to $8 million. Since then there’s been a few things that has changed. The 0.043 mg/L limit has now been deferred five years to 2027. The Cahaba is actually starting to be restored to its designated uses. ADEM is still continuing to collect tons of data to see if 0.043 mg/L is what they need to do or is 0.20 mg/L the correct amount.”

This is the second Grand Award earned by a Garver-led project in the ACEC-Alabama contest. The Tuscumbia Water Treatment Plant and Supply Improvements project earned the Grand Conceptor Award in 2013.

“One of the reasons we won the award is because we worked with the clients and we made a decision to work with ADEM at the start to make sense of what to construct based on permit limits,” Cardwell said. “We only had one change order for the project which was actually a credit of $300,000 back to the city.”

Pelham’s summer reading program off to a good start

PELHAM – Libraries where children silently read books are a thing of the past. That was evident on Thursday, June... read more