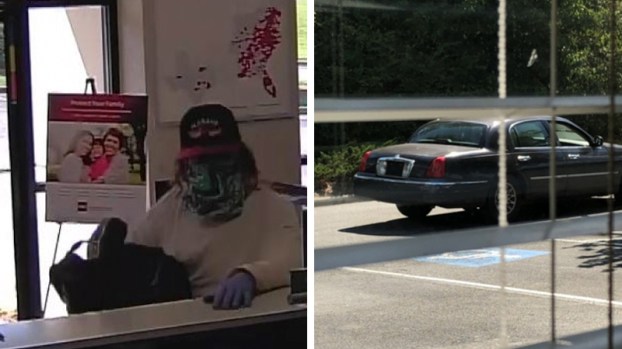 Police are searching for a suspect, and an accomplice, who robbed a bank on Thursday, June 7, off Meadow Brook Road. (CONTRIBUTED)

HOOVER – Two suspects are on the run after robbing a bank off Meadow Brook Road on Thursday, June 7, and fleeing from police.

A white male wearing a black baseball cap and green bandana covering his face entered the bank and demanded money, according to a press release from Hoover Police Department.

The suspect then jumped the counter and removed an unknown amount of currency from the teller drawer.

The suspect did not present a weapon, and no one was injured during the robbery, according to HPD.

He fled the area in a black Lincoln Town Car.

A responding officer encountered the vehicle traveling south on Meadow Brook Road and attempted a traffic stop, according to HPD.

The vehicle became disabled after a short pursuit, and the white male suspect and a black male accomplice were seen running from the vehicle on Brook Hill Circle in the Meadow Brook subdivision.

Officers with the Hoover Police Department and the Shelby County Sheriff’s Office searched the area for the suspects, but they are still at large.

The white male is believed to be in his early- to mid-50s, about 6 feet tall, average build with long hair.

No details are available about the black male who was seen running from the vehicle.

Anyone with information about this case should call Detective Drew Mims at 444-7274.

If you wish to remain anonymous and qualify for a cash reward, call Crime Stoppers of Metro Alabama at 254-7777.