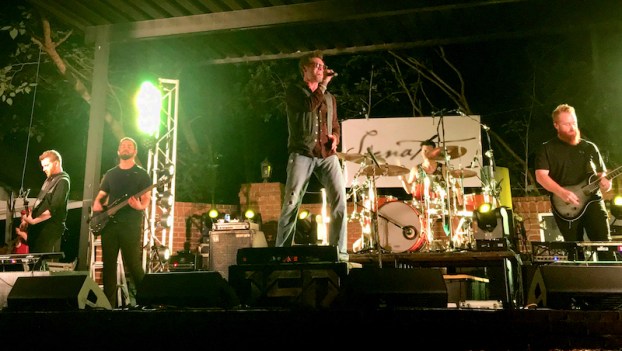 Driving into Helena on Highway 52 for the first time in May 2005, we stopped for lunch, where we were told, “You won’t want to drive into Old Town today, Bo Bice and Lynyrd Skynyrd are playing a concert and traffic will be at a standstill.”

We took that advice, but made Helena our home and when Bice was next in town and performed, my 10-year-old son and I stood in line for an autographed T-shirt.

At Bice’s next charity event on September 26, 2009, I photographed him heading out on his motorcycle for the Smoke & Gun Poker Run and was in front of the stage that evening documenting his many moves at Jammin’ at the Junction.

At that event I also photographed Bice’s eldest son, Aiden, then age 4, watching his father from the audience.

Bice is well-known for his generosity and contributions to causes and those in need and his latest appearance brought him to town for a fundraiser for The Miracle League.

The estimated cost of this project is $700,000 on land donated by the city.

Host for the evening was Jane Holmes Public Library’s own (ever-endearing) Dan Dearing.

After a performance by Sanchez Just Me, Jordan Narkates, Birmingham’s 7 Stone Riot took the stage. Lead singer Whitt Milsap and Bice jived together through Bice’s songs and he thanked the band for being willing to learn his music for this event.

It was the last part of the show that was most moving, as Bice brought up some of his fans, local Miracle League faces and his four children (one who recorded his siblings from the wings) known as The Bice Kids. They energetically carried the audience through Bruno Mars’ Uptown Funk You Up, with Aiden executing the verses.

“If you don’t believe me just watch!”

Next to me by the bleachers was the young Kolt Scozzaro, twirling two lit-up toy swords to the beat—a unique performance in itself!

Bice concluded the evening by thanking local volunteers and introducing Homer, the Miracle League Mascot. “We started talking about this in February and this is what can happen when you don’t give up and you don’t get discouraged and you ask your community to team up with you. You made tonight happen and we love you for it.”

Donations may be made at: Helenamiracleleague.com.

By LAURA BROOKHART / Community Columnist Recently on a visit to Jane B. Holmes Public Library, my attention was grabbed... read more