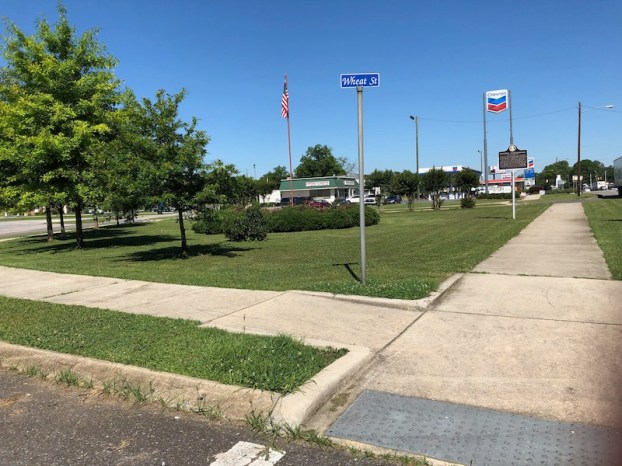 This designation includes a requirement to implement a community project. “The description of the project was part of the application process and now that the school has been designated we need Council approval to work on town property to implement the project,” Lovelady said.

Describing the proposed project area, Lovelady said, “It’s the grassy triangle at the yield area, kind of in front of Russell Hardware and surrounded by the Coffee Shoppe and Chevron.” She went on to explain that since it’s right on 280, everyone will notice it as they drive through Harpersville.

The project will include an update of the landscaping and the display of three flags: the American flag, the State of Alabama flag and a “to be designed” Town of Harpersville flag.  The flags will be purchased from the Alabama Institute for the Deaf and Blind. The newly designed Town of Harpersville flag will be handled through the Coosa Valley Academy Art Department.

“The art department will design several options for a town flag. Those options will be brought back to the Council for selection,” Lovelady said.

Council member Marvin Dates asked, “What colors will be used?”

“Well, the water tower is green and white,” Lovelady said.

The Council approved the project area and indicated they would look forward to reviewing the options for a town flag. The new flag will reportedly also include the town motto: “Rich Past, Bright Future.”

In December 2017, Gov. Kay Ivey announced the Alabama Bicentennial Schools education initiative, designed to encourage all public, private and home school students and teachers to participate in the celebration of Alabama’s 200th anniversary of statehood. Alabama became the 21st state in 1819.

In announcing this initiative, Ivey was quoted as saying, “Just as it is important that we celebrate our past, we must also ensure future generations understand our state’s history, so that they can guide us to new heights in the days ahead.”

Coosa Valley Academy is one of 200 schools selected to be an Alabama Bicentennial School. The designation is accompanied by a $2,000 grant to help with implementation of their proposed project.

After completion of the project a report will be submitted to the Alabama Bicentennial Commission and 21 schools, three from each of Alabama’s seven Congressional districts, will be recognized as Bicentennial Schools of Excellence.

The Academy was selected for this distinction in recognition of their commitment to community and civic engagement based on their proposed project themed, “OUR TOWN, OUR STATE, OUR COUNTRY: Harpersville.”

Lyman Ward’s salutatorian is from Vincent

By KATHY COPELAND / Community Columnist On May 19, a happy graduate walked across the stage at Lyman Ward Military... read more