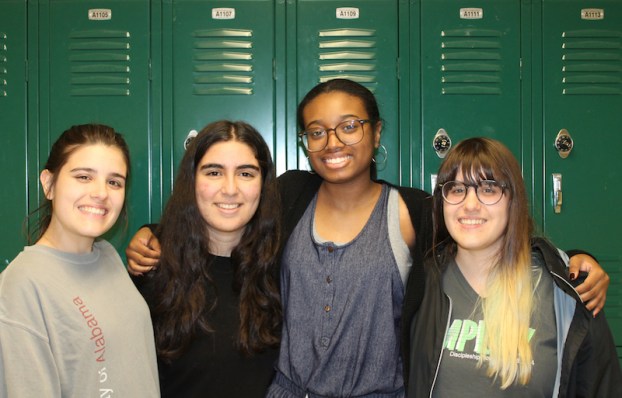 Jessie Todd, Kaylie Rastegar, MaKenzie Rollins and Falon Todd teamed up for writing and other communication projects this year and competed on their own. The work ethic of these and other students keeps awards coming for PHS. (Contributed)

“The best part of this experience was the atmosphere in the auditorium. It felt like a safe space for artists to share and to perform in front of their peers,” Kaylie Rastegar wrote about performing at Write Night this year. Rastegar loves both creating and competing and she’s done a lot of both in Pelham’s Writing Program.

“Looks like a winner’s letter,” my husband said after a trip to the mailbox.

Most of our major writing contests reported while we were still in school. The National Council of Teachers of English, (NCTE), was the return address.

The National Council of Teachers of English Achievement Awards in Writing was for high school juniors only. The contest was demanding—and intimidating for students—to send an essay to be judged by “a tribe of English teachers” as they said. But some students persevered—like Kaylie Rastegar.

“Congratulations…,” the letter began. Kaylie Rastegar was awarded “the Certificate of Superior Writing, the highest honor.” The letter went on to reveal what a “tremendous accomplishment” winning this honor really was.

Kaylie’s NCTE award is the culmination of a junior year marking three years of high school writing work. Rastegar also received the Sewanee Book Award for Writing Excellence at PHS Awards Night. In addition to winning many writing awards, Rastegar has co-authored three children’s books. A team player committed to challenging herself, in Competitive Writing this year, Rastegar teamed up with Falon Todd to perform a duet spoken word poem at Write Night.

Days later, she was on board with MaKenzie Rollins, Falon and Jessie Todd creating a video for the Toyota Drive365 Contest. This innovative team of problem solvers created a fantastic public service announcement warning against the dangers of drowsy driving.

While Competitive Writing was removed from the schedule this year, PHS writing classes will continue to compete.

PHS Communication captured many awards this year thanks to enormous student commitment. Rastegar’s statement sticks with me, “a safe space for artists to share and to perform in front of their peers.”

Maintaining and growing that safe space at PHS propels me.