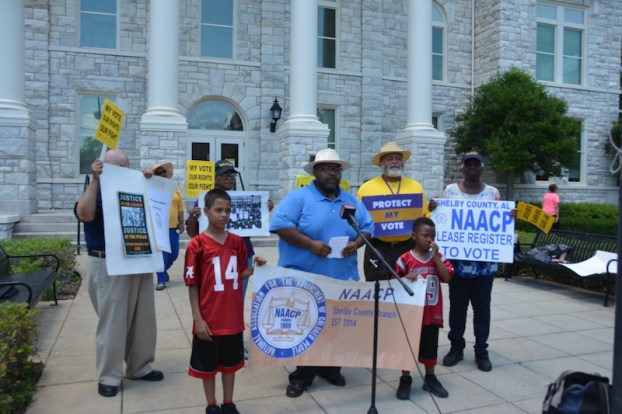 The Shelby County NAACP demonstrated in response to the five-year anniversary of the Shelby County v. Holder ruling and recent changes to polling place locations in the county. (Reporter photo/Amalia Kortright)

“In 2013, the Supreme Court ruling Shelby v. Holder changed what had become the single greatest legislation ever passed for human rights and voting rights in this country,” Shelby County NAACP President Kenneth Dukes said. “There have been several things since that ruling that has affected voting rights across this entire country.”

Dukes said the recent change in local polling places before the June 5 primary elections made it more difficult for some to cast their ballots. Dukes said changes should have been announced earlier and residents should have been notified more clearly.

“There are some cities that don’t even have a place to vote, such as Wilton, Alabama. They had to come to the adjacent city of Montevallo, because there was no place or site in Wilton for them to be allowed to vote,” Dukes said. “In this country, it should be easier to vote.”

According to Dukes, the recent changes served to disenfranchise voters in certain parts of the county.

“Several (Wilton residents) didn’t even make it to the polls,” Dukes said. “This is clearly an example of disenfranchisement, whether intentional or not.”

Dukes said the Shelby County NAACP is teaming up with the NAACP national headquarters for a nationwide voting rights initiative on June 25 in support of the Voting Rights Advancement Act proposed by Congresswoman Terri Sewell, D-Alabama.

“(That) is the fifth anniversary of the Shelby v. Holder ruling,” Dukes said. “Hopefully, across this country, every American that was affected by the Voting Rights Act will call their congressmen, their senators, the White House and Tweet the White House and do whatever we need to do to sound the alarm when it comes to a basic human right.”

Dukes said the ramifications of Shelby County v. Holder expend beyond the borders of the county and affect people from all over the United States.

“We need the United States of America to come to Shelby County, to the epicenter of what has been an earthquake compared to voting rights, and stand united that we do not allow those disenfranchisement issues to affect America and all those that have the right to vote,” Dukes said.

By NEAL WAGNER / Managing Editor ALABASTER – Alabaster’s Foodland Plus grocery store near the intersection of Alabama 119 and... read more