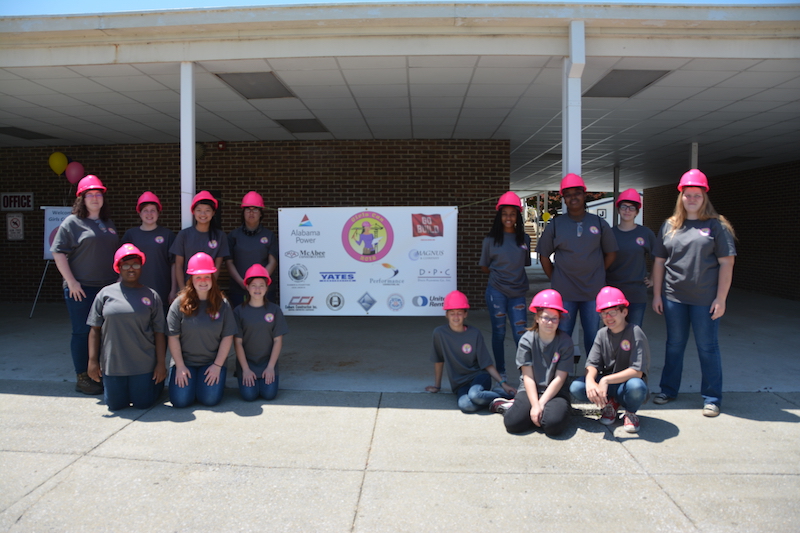 A total of 15 female students from throughout Shelby County participated in the Girls CAN Construction Camp, where they learned about different trades and skills. (Reporter photo/Amalia Kortright)

COLUMBIANA – A group of female middle and high school students from different schools throughout Shelby County spent the week learning about different types of skilled trades during the Girls CAN Construction camp between June 4-8 at the Career Technical Education Center in Columbiana.

According to Shelby County Schools Career and Technical Education Supervisor Julie Godfrey, the Girls CAN Construction Camp was a joint effort between the school system and Alabama Power.

“This is just a way to expose students to these nontraditional skilled jobs,” Godfrey said. “Even though these have always been open to both genders, there are so many opportunities for females in these jobs.”

During the week, each day was dedicated to a different skilled trade, including carpentry, plumbing, welding and electrical work. On the last day of camp, the students took a field trip and toured the E.C. Gaston Power Plant near Wilsonville and participated in a graduation ceremony once they returned to CTEC.

Godfrey said she enjoyed working with each of the 15 students, who she said were ready and willing to learn.

“They were all about it,” Godfrey said. “It’s been a really good group. They’ve been independent, excited to be here and engaged.”

“It’s a lot of fun to watch them be creative,” Miller said. “They got to go outside of their boundaries. A lot of them were really intimidated at first.”

“As far as attentiveness is concerned, I was surprised at how attentive they were,” Horton said.

Godfrey said she hopes the camp exposed each student to a wide variety of career options, programs and skills.

“Not everyone who comes through here is going to be a welder for life, but it does help with students who may choose to come to CTEC,” Godfrey said.

“I had a fun experience, even though I felt like my feet were going to give out,” Stricklin said. “Using the nail gun was especially fun and terrifying.”

While she hasn’t set her heart on a specific career path yet, rising Calera High School sophomore Kaitlyn Mitchell said she plans on using the skills she learned in the future.

“I wanted to see what I could be interested in and consider in the future,” Mitchell said. “I learned about myself and basic skills that I’ll need when I start a family.”

Parent Christy Kelley said she was appreciative of the school system and the camp’s sponsors for allowing her daughter to have the opportunity to attend.

“I was super excited for my daughter to participate and experience the Girls CAN Construction Camp,” Kelley said. “I believe it will give her skills that she’ll be able to use in the future, and who knows, maybe in her career.”