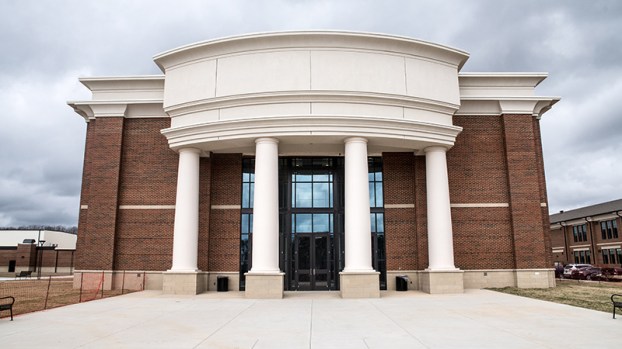 The state building inspector is set to tour the new Thompson High School indoor sports arena and performing arts center, pictured, in late June. If the inspector issues a certificate of occupancy, the facilities will be ready to host students when they return in August. (Reporter Photo/Keith McCoy)

When will construction be complete at new THS?

ALABASTER – Final state inspections of the indoor sports arena and auditorium areas will be conducted in late June, while crews are running behind schedule on the outdoor sports facilities at the new Thompson High School, the project’s manager told members of the Alabaster Board of Education during a June 11 meeting.

Jonathan Grammer with Volkert Inc., which is managing the new Thompson High School construction project, said crews are working with the goal of having all of the new facilities and the school’s Kent Dairy Road entrance completed by the time school starts back in early August.

Argo Construction currently is working to finalize punch list items on the main academic building, which opened to students this spring, and likely will have those items finished within two to three weeks, Grammer said.

Phases two and three are being handled by the Clements Dean Building Company, and are nearly complete. The two phases will be inspected by the state building inspector on June 18, Grammer said. If the building inspector issues a certificate of occupancy after the inspection, the facilities will be ready to host students for the upcoming school year.

Clements Dean also is handling phase four of the project, which Grammar said is running behind schedule, but likely will be ready to host the Warriors’ first home football game of the season on Sept. 14 against Oak Mountain.

“We are meeting with the contractor weekly. They are behind in some areas they should be done with by now,” Grammer said. “They understand and know you need those areas for summer training and summer athletics. They would like to get everything done by the end of July.”

Grammer said subcontractors, which are hired by contractors to do specific jobs in a construction project, have seen a spike in jobs since the economy has improved, and said the local workforce has been unable to keep up with the demand.

“The problem we run into is when subs don’t show up and do the work when it’s scheduled, it puts the whole process behind,” Grammer said. “We are experiencing this in other places too, it’s not just here. We’re having issues all over the state. There is a lot of work, and the workforce is seeing a drop.”

AT&T and Charter recently moved utilities to allow for the widening, and water and sewer lines still must be relocated. Grammer said Chilton Contractors, which also completed the widening project on Thompson Road, “did commit to have (the Kent Dairy Road widening and entrance) done before school starts.”