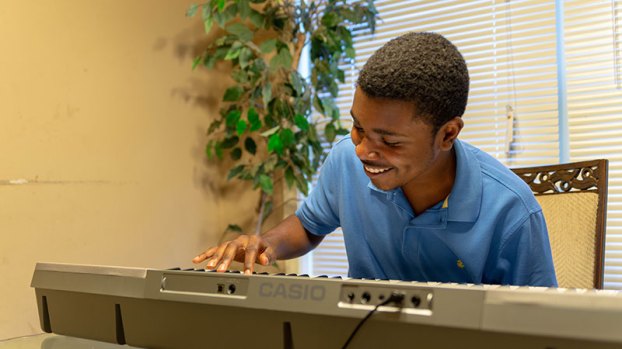 Alabaster resident Brent Christian plays out the beats for one of his songs on his Casio keyboard at his home on June 12. Christian has seen his musical career take off over the past few years, and has songs available through most digital music avenues. (Reporter Photo/Neal Wagner)

“People tell me ‘You’ve got to be real when you rap,’ but there is already so much negativity in the world. I wanted to focus on the positive and write songs that make me a better person,” Christian said during a June 12 interview. “I try to be as positive about it as I can. People may say it’s corny, but I don’t see it that way. I’d rather purposefully try to be positive rather than negative.”

Since his freshman year at THS, 16-year-old Christian, who performs under the moniker B.M.C., has seen his musical career take off as he has steadily become confident working with the Mason Music Studio in Vestavia Hills, producer Adam Franklin, and Paul Neal with Hidden Place Production for mastering his tracks.

Today, has copyrighted three songs, is a member of the BMI label for royalties on his songs and has music available on nearly every digital avenue available, such as iTunes, Amazon, Pandora, YouTube, Spotify and more.

Christian’s career began two years ago when he started creating beats on his Casio keyboard at his Alabaster home and matching lyrics to go with the tracks. His first hit was “A Little Bit of Light,” which carries a message urging others to be the light in what can be a dark and depressing world.

His second hit was “That’s Real Love,” which was written using the inspiration he got from his friends, family members and those who have supported him in his life – particularly his mother.

Christian’s most recent track “I Wish You the Best,” which was released in early June, carries a message of comfort for those who are dealing with hardships or negative feelings in their lives.

Thousands of listeners have enjoyed Christian’s music through digital music services, and he has become somewhat of a celebrity at THS since his classmates discovered the tracks.

“People at school say “This is you? Man, you’re getting popular.’ People will be playing my songs in class, and the teacher will say ‘OK, class is starting. We’ve got to stop listening to Brent’s music,’” Christian said with a laugh. “My goal right now isn’t to make a lot of money. I’m just trying to get my music out there.”

Christian also has accolades to back up his musical talent. He won a talent showcase in April through the Cultivate 4 Mentoring program in Roebuck, and he placed third out of 22 contestants at the THS talent show in May. He has developed his music career while running cross country and track, working at his job and maintaining a 4.35 GPA.

Christian’s mother, Tasha Christian, has supported her son’s music goals since the beginning, and has helped to develop many of the relationships he has in the industry now.

“He has always been a good kid, always,” Tasha Christian said. “So I don’t mind supporting him at all. This is a positive thing in his life.”

Brent Christian has cut his average time recording a song in the studio in half, and said he now feels much more comfortable when recording songs than he first did. He is set to visit the studio again in July to record his next song, which will be released later this summer.

Moving forward, he said he plans to continue writing songs with a positive message, and is humbled by the support he has garnered.

“My ultimate goal is to make sure 80 or 90 percent of people like my songs and like what I’m doing at the same time,” Brent Christian said. “I try to appeal to as many people as I can while doing the right thing.”

FROM STAFF REPORTS MONTGOMERY – At the Alabama Community College System board of trustees meeting on Wednesday, June 13, Chancellor... read more