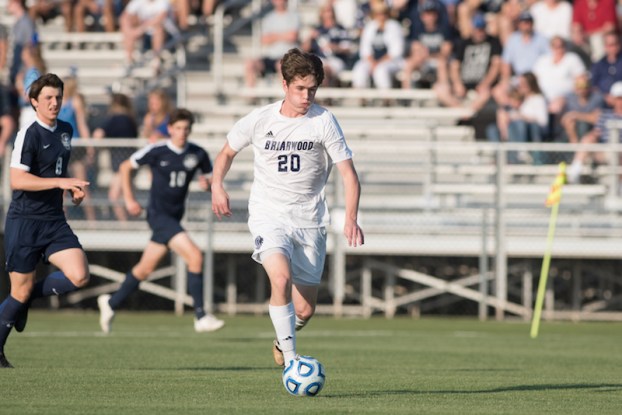 Briarwood's Logan Frost was named the 2018 Shelby County boys soccer Player of the Year after an incredible junior season with the Lions. (Reporter photo/Keith McCoy)

As a sophomore, he was named to the All-County First Team thanks to 25 goals and 17 assists; now, as a junior, Logan Frost has earned the top award in Shelby County.

After an incredible season for the Briarwood Lions, Frost has been named the 2018 Shelby County Boys Soccer Player of the Year.

In one years’ time, Frost added 15 more goals to lead the county with a total of 40 goals in 2018 as he helped lead the Lions to the state championship for the second consecutive year.

In addition to those 40 goals, he added 26 assists, which was also one of the best numbers in the county, for a total of 106 points this season.

He was also named to the first team All-State Team for the second year in a row, was a member of the All-Metro First Team and Briarwood’s team MVP this season.

A player hot on Frost’s heels this season was Spain Park’s Brooks Rice, who finished just behind Frost with 37 total goals and 12 assists this season, and was a Gatorade Player of the Year nominee.

Had those two been on the same team, it would have been one of the most dangerous forward duos to ever play soccer in this state, that’s how good both of those players are.

In his last two seasons for the Jaguars, Rice had a jaw-dropping combined total of 78 goals and added 17 assists to earn recognition as one of the best players in the county.

Frost, however, was the main goal scorer for a Briarwood team that at one point this season won 21 consecutive games and made it to its second straight state championship game.

He was also possibly the fastest player in the county with the ball in his control. Frost could have two or three defenders in front of him, make one move, and boom, he’s blown by all three for an easy one-on-one situation with the keeper.

With all of the incredible moments he had this season, it was one of his rarely missed goals that stuck in my mind.

It was a matchup Briarwood won 10-0 against Calera to claim the area championship on April 4, but it was one of the few goals that night that didn’t find the back of the net that stood out.

Frost had one of his many breakaways in the game, sprinting by himself up the far sideline before eventually facing an open net opportunity.

Coming from an odd angle, Frost hit the post and missed the shot before letting out a scream that I proclaimed at the time an opera singer would have been proud of.

While his teammates, and even Frost himself, let out a chuckle at the shrill sound of his scream, it was a moment that stuck with Frost the rest of the season as well.

The rest of that night, and for the rest of the season, he was determined to be the best he could be to help his team reach its full potential.

If that one missed goal was inspiring, it’ll be interesting to see what two heartbreaks over the last two years in the state championship game will do for the rising senior in 2019.

Cam Newton 7-on-7 coming to BlackWatch

By ALEC ETHEREDGE | Sports Editor NORTH SHELBY – Cam Newton will be back in the state where he became... read more