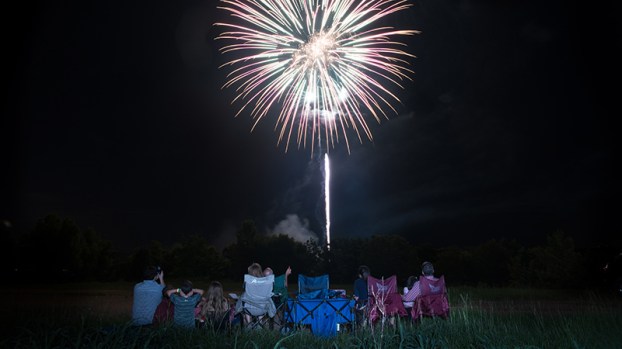 Spectators enjoy last year’s Alabaster fireworks show near the Publix shopping center on Alabama 119. This year’s show will be on the night of July 3. (Reporter Photo/Keith McCoy)

Where are the best places to view Alabaster’s fireworks show?

ALABASTER – The city of Alabaster will continue an Independence Day tradition on July 3, when it holds its annual fireworks show off Alabama 119, and is encouraging locals to plan out their viewing spots now.

The city will hold a free public fireworks show beginning at 9 p.m. on Tuesday, July 3, and will launch the spectacle from a field behind the Alabaster Post Office at 50 Kent Stone Way and Starbucks at 2171 Kent Dairy Road off Alabama 119.

The display will be about 15 minutes long, and the APH 99.9 radio station will again broadcast music to accompany the fireworks aerial display.

This will mark the fourth year the city has produced the fireworks show off Alabama 119 after moving the annual display from Veterans Park a few years ago.

Parking will be prohibited along state and county roads during the display, and the city is encouraging residents to view from the following areas:

ALABASTER – Shaggy Chic Pet Grooming celebrated its establishment in the Alabaster community during a ribbon cutting ceremony at its... read more