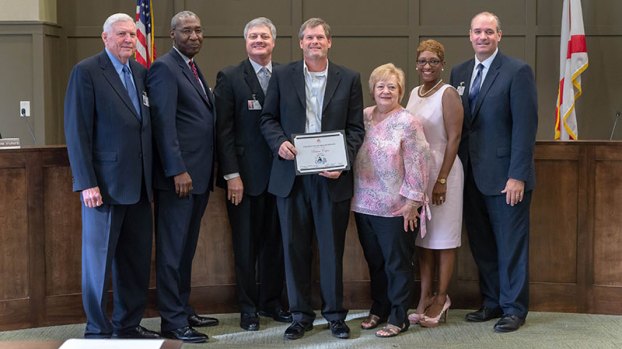 ACS honors Copes for winning LifeChanger of the Year

ALABASTER – Thompson High School pre-engineering teacher Brian Copes earned the spotlight during the Alabaster Board of Education’s June 11 meeting for being named the top teacher in the nation, but he didn’t come to the ceremony empty handed.

“I have something for you guys as well,” Copes said as he presented the school system’s chief school financial officer with a check for $5,000 to benefit THS.

School Board members presented Copes with a certificate honoring his achievements during the meeting, which came about a month after Copes was named the 2017-2018 LifeChanger of the Year award from the National Life Group.

Copes won the award, which “recognizes and rewards K-12 educators and school employees across the country,” during an awards dinner for the awards finalists in Bermuda on May 17.

“Our program celebrates those who are making a significant difference in the lives of students by exemplifying excellence, positive influence and leadership,” reads the organization’s website.

To be a LifeChanger of the Year winner, educators must “make a positive impact in the lives of students, enhance their school district’s atmosphere, culture and pride, demonstrate exemplary leadership at the school and/or district level, possess a proven record of professional excellence, show commitment to building a nurturing environment that supports learning and adheres to the highest moral and ethical standards.”

After he was nominated for the award by Cena Davis in early 2017, Copes learned he was one of five finalists for the award during a surprise announcement at THS on April 3. Copes won a $5,000 prize for being named a finalist, and won an additional $5,000 for being the national winner.

“He is an advantage to our students, and he has made a worldwide impact,” ACS Superintendent Dr. Wayne Vickers said of Copes. “What an honor for his work and for the work his students are doing all over the world.”

Copes and his students have had an impact throughout the world during his teaching tenure. While at Calera High School in 2008, Copes led a group of eighth-graders to victory in a collegiate engineering competition, and has led students through projects to design low-cost prosthetic legs, a hydroelectric dam and basic utility vehicles for use in developing countries.

After coming to THS in 2014, Copes led the Sister Schools project to multiple visits to Jutiapa, Honduras, where students have volunteered in the town’s medical clinic, set up computer infrastructure and built water purification systems.

Through the Sister Schools project, Alabaster teachers have been able to share their lessons with children in developing countries via video conferencing, which has allowed Alabaster students to interact with their peers on the other side of the world.

Recently, Copes’ students designed and built a solar-powered briefcase to ship to a refugee camp in Kenya, and built a welding classroom inside a shipping container to ship to Belfate, Honduras.

PELHAM – As part of its continuing commitment to the communities it serves, SouthWest Water Company has announced cash scholarships... read more