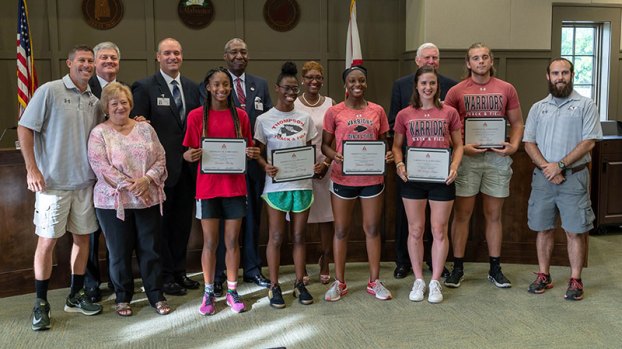 The Alabaster Board of Education honors members of the Thompson High School track and field team who won individual state titles during the 2018 state championship meet. (Reporter Photo/Neal Wagner)

ALABASTER – Several weeks after earning spots atop the podium at the state outdoor track and field meet, a group of Thompson High School athletes again earned the spotlight during an early June Board of Education meeting.

During its June 11 meeting, the School Board honored six THS track and field athletes for earning Class 7A state championships in several events this past season.

“This program has certainly done well over the years, and we want to celebrate your accomplishments today,” said ACS Superintendent Dr. Wayne Vickers.

-Viktor Turek: Discus throw, setting a new 7A state record in the process

The athletes were among several from THS who fared well in the 2018 outdoor track and field meet. In addition to the titles by Hogue, Turek and the members of the 4×100 meter relay team, Steve Villegas placed fourth in the shot put, Zoria Miller finished fifth in shot put and seventh in the javelin throw.

Ebony Butler placed sixth in the discus throw, Oden placed seventh in the triple jump, Holifield finished fifth in the 100-meter dash and finished the 200-meter dash by finishing in third place.