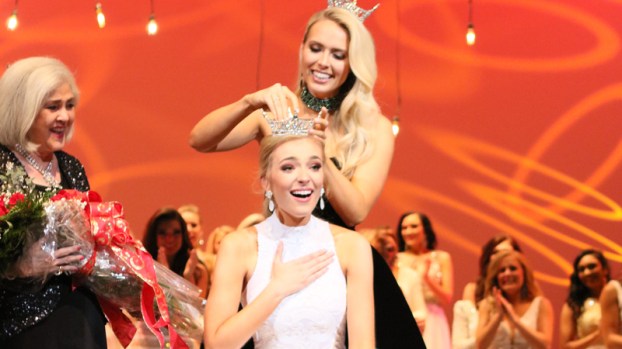 Miss Tuscaloosa Callie Walker, a Shelby County native, is crowned Miss Alabama at the culmination of the pageant on June 9. (CONTRIBUTED)

Two-time first runner-up Callie Walker finally claimed the crown when she was named Miss Alabama at the conclusion of the annual pageant on June 9.

A Shelby County native and 2015 Oak Mountain High School graduate, Walker said she is excited to travel across the state promoting her platform of sustainability and to compete in the Miss America pageant in September.

Walker attends the University of Alabama and won the Miss Tuscaloosa preliminary pageant, and then was best in the talent and swimsuit portions of the pageant.

For the talent portion, Walker performed “The Hoedown” from “Rodeo” composed by Aaron Copeland.

Walker’s mother is her ballet teacher and choreographed the Western-themed piece when Walker was young.

“I just really loved the music, and when I started competing, I knew I wanted to compete to that piece,” Walker said. “She also created the costume, so I always have a piece of my mom with me when I’m on the stage.”

Walker said she decided on her course of study in college, musical theatre, while attending Oak Mountain High School.

She debuted in “Grease” as a junior at OMHS, and then performed in “Shrek The Musical” as a senior.

“That was the deciding factor for what I wanted to do,” Walker said.

Walker will perform “The Hoedown” at the Miss America pageant in Atlantic City, New Jersey, in September, and said she will spend much time leading up to the pageant on interview prep, staying up-to-date on current events and staying fit.

Though the swimsuit competition has been dropped from the Miss America pageant, Walker said she will maintain her routine.

“Working out and eating healthy just make you feel better,” she said. “That’s one thing Miss America has definitely done for me, it has instilled the value of a healthy lifestyle.”

No matter the outcome of Miss America, Walker will represent the state of Alabama during the coming year, and will work to promote her platform: “Let’s Talk Trash—Green Kids for a Green Planet.”

Walker got a taste of her new responsibilities when she served as Miss Alabama’s Outstanding Teen, and she said she looks forward to meeting people across the state.

“This is a full-time job, and I’m so excited to travel and share my story with others and to listen to their stories,” Walker said. “Everyone has a story that is special to them.”

Walker said she will always remember the “camaraderie” shared among the Miss Alabama contestants.

“Every single girl that took part, there was just something so special with each and every one of them,” she said. “It was a week that I will never forget, and it was made so much more special because I’ll be representing a group that genuinely cared about each other.”