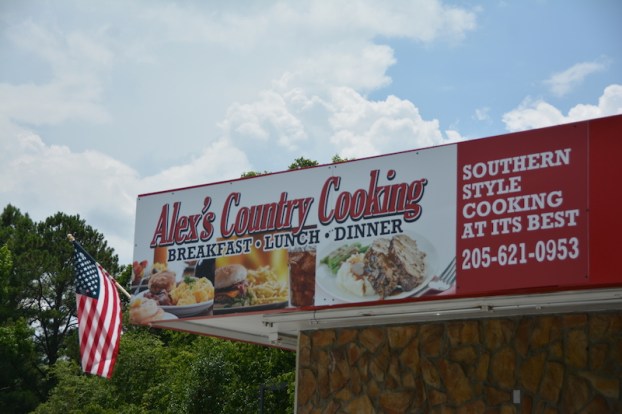 Alex's Country Cooking opened at the 119 Exxon gas station in Alabaster on May 1. Since then, the owners said they have not received a single complaint. (Reporter photo/Amalia Kortright)

ALABASTER – Since it first opened on May 1, Alex’s Country Cooking co-owner Alex Bhadigia said it has quickly become a staple in the Alabaster community. According to Bhadigia, the restaurant’s slogan is “Country Cooking at its Best.”

Bhadigia, who owns and operates the Alex’s Country Cooking with his brother, Mike, said the restaurant is an extension of the Exxon gas station on Alabama 119.

According to Bhadigia and his wife, Farmin Jiwani, Alex’s Country Cooking is one of the only meat-and-two restaurants in Alabaster.

“The reason we did a meat-and-two was because that was what Alabaster was lacking,” Jiwani said.

Bhadigia and Jiwani said they are focusing on using fresh ingredients for their homemade dishes and keeping prices affordable for the entire community. One of the best parts of owning the restaurant, they said, is seeing the customers.

“We love seeing the tables filled and all of the people together talking,” Jiwani said. “They get to have their personal time. That’s why we don’t have TVs.”

Bhadigia said he has noticed that Alex’s County Cooking has become a popular spot for members of the Alabaster Police and Fire Departments. Currently, he said he’s looking at establishing discounts for police, firefighters, military personnel, veterans and “anyone who has served the country.”

Bhadigia said they have appreciated the support from the Alabaster community, as well as from those who have traveled from outside of the community to eat there.

“We haven’t had a complaint. All we hear are good things,” Jiwani said. “People are coming all the way here from Chelsea, Jemison and the 280 area.”

Bhadigia said they are considering holding a second grand opening celebration soon, and are encouraging everyone to keep up with the “Alex’s Country Cooking Alabaster” Facebook for details about the restaurant.

HOOVER – Seniors, city officials and others gathered at the Hoover Senior Center on Tuesday, June 19, to celebrate the... read more