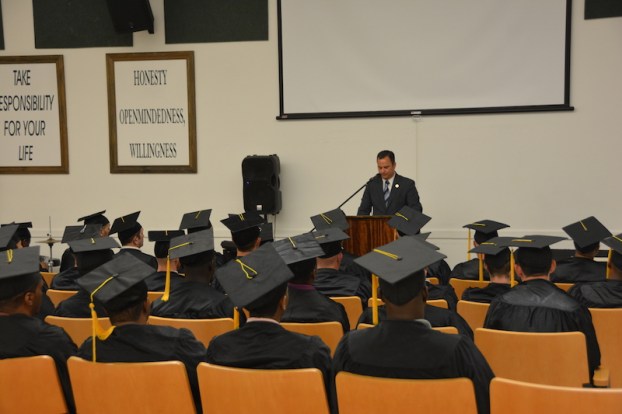 SCDETF Cmdr. Clay Hammac addresses ATEF graduates who completed a six-month program and will be returning to their families or are headed to a work release program. (Reporter photo/Amalia Kortright)

COLUMBIANA – The Alabama Therapeutic Education Facility in Columbiana graduated more than 40 men during a ceremony on the morning of Friday, June 15.

According to ATEF Director George Edwards, the residents who graduated completed a six-month program and either returned to their homes and families or entered a work release program from the Alabama Department of Corrections.

During the ceremony, one former ATEF resident who spoke said this served as a way for him and his fellow graduates to start anew. He referenced the biblical story of Jacob, who received God’s blessing and a new name after wrestling with an angel.

Shelby County Drug Enforcement Task Force Cmdr. and guest speaker Clay Hammac urged each graduate to examine their purpose in life. He referenced the story of Father Damien, who served as a missionary in a leper colony in Hawai’i.

Hammac also cited the biblical story of Moses, who fled Egypt after killing someone and spoke to God in the form of a burning bush. Ultimately, he freed the Hebrew slaves from Egypt, despite struggling with a lisp.

“After that conversation with God, he understood what he had to do, but he doubted himself,” Hammac said. “You have a purpose, and you have the opportunity to impact others. That begins today.”

Throughout the program, residents had the opportunity to learn different skilled trades including HVAC, electrical work, plumbing, carpentry and welding. Those who had not previously received a high school diploma also earned their GEDs.

Additionally, they took several life skills classes that focused on things like anger management and fatherhood.

Edwards said it was astounding how far many of the residents have come over the course of half a year.

“When some of them first came here, they didn’t want to be here,” Edwards said. “Some of them ended up speaking at graduation.”

Hammac said he is proud of the men who graduated, and anticipates that they will accomplish great things.

“Second chances are a wonderful thing to celebrate,” Hammac said.

By ALEC ETHEREDGE | Sports Editor PELHAM – After their inaugural season in the Southern Professional Hockey League, the Birmingham... read more