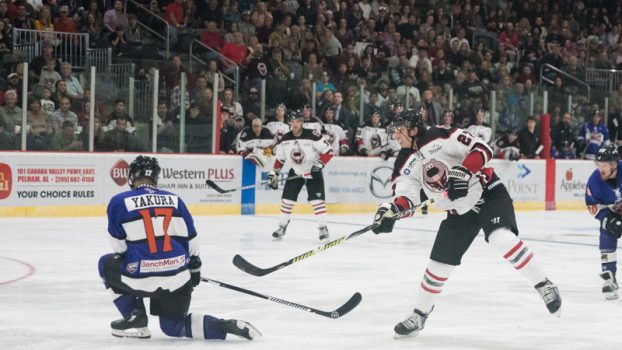 The Birmingham Bulls are hosting a summer camp July 9-13 alongside the Pelham Hockey Development Academy. (File)

PELHAM – After their inaugural season in the Southern Professional Hockey League, the Birmingham Bulls turned heads with the way they pushed for a playoff spot late in the hockey season after starting off the year in a struggle as an expansion team.

Now the team that just missed out on a spot in the postseason during the 2017-18 season will be hosting a camp at the Pelham Civic Complex as they try to grow excitement around youth hockey in the community.

In association with the Pelham Hockey Development Academy, the Bulls will be putting on the camp from Monday, July 9, through Friday, July 13.

The camp will cost $195 and will feature several high level coaches as well as training from some of the Bulls’ best players including captain Craig Simchuk as well as Josh Harris.

Coaches that will attend and be part of the camp include Bulls head coach Jamey Hickes and Alabama head coach Kyle Richards. Other players or former players attending include Team USA’s Erik Hudson and Bobby Reed, both of who have experience in professional hockey.

Throughout the week, campers will have the opportunity to gain instruction with 10-plus hours of on ice instruction, hockey specific off ice training (each day) and dry land games to encourage fun competition.

Each camper will also receive a complimentary Bulls camp jersey for taking part in the event.

The PHDA is an academy that is meant to help develop skills and techniques needed to go from a traditional student of the game to a high-level hockey athlete.

Students in PHDA learn how to get better edges, more explosive speed, more hockey smarts and better development of the game as a hole on the ice.

With the excitement of hockey growing in the south thanks to the Nashville Predators recent success as well as the return of the Bulls, a lot of interested hockey students are starting to appear and this camp will give them the chance to learn the skills needed to compete and give them the chance to join one of the many junior or adult leagues that Pelham hockey offers at the civic complex.

Check in will be each day at 7 a.m. each day of the camp, while pick up is scheduled for 4 p.m.

If you would like to register, you can go to Pelhamhockey.net and go to the PHDA tab. On the drop down menu follow the summer camp registration link and follow the instructions.

On the website, you will also find plenty of information on how to join leagues and other developmental camps to get your foot in the door when it comes to local hockey.