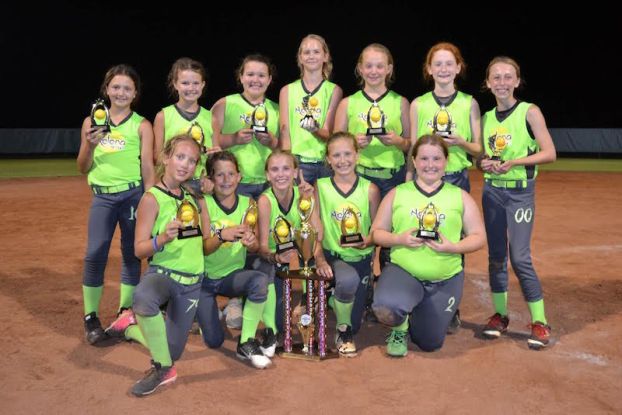 The Helena 10U Park & Rec All-Stars softball team recently won the area tournament, which advances them to the state tournament held in Huntsville June 21-23. (Contributed)

By Laura Brookhart | Special to the Reporter

WETUMPKA – The Helena girls 10U Park & Rec All-Stars softball team are on the journey to repeat last year’s success.

On Saturday, June 16, for the second year, the team won the area tournament played in Wetumka. This win advances them to the state tournament, which will be held in Huntsville from June 21-23.

After the state tournament is completed, they will have about a week before they head to Gulf Shores for the USSSA Rec/All-star World Series, which will be held July 1- 5.

“We have all improved from last year due to a lot of hard work,” Marlee Parsons noted. “We will continue to do our best each game. We look forward to continuing our journey and playing in the state tournament.”

Head coach Rick Sprouse is leading the way, as he did last year, and Sue Parsons is helping out as the pitching coach. Other coaches include Jeffery Fulmer, Keith Osborn and Michael Darabaris.

“We have an incredible group of girls this year with five returning from last year,” Parson’s said.

With some players in their second year on the team, experience is also playing a vital role.

A big reason for that growth is the job of the coaches, which Williams recognizes.

“We have the best coaches,” she said. “I love being able to throw people out from home plate on my knees. I also hope to hit it over the fence soon.”

Another aspect that makes this team so special and helps them achieve such impressive runs is their closeness to one another.

“Our team is extra special because we’re each other’s biggest fans and always back each other up,” Jocelyn Fulmer said.

“Our team works well together, and we are all very close,” Mallory West said. “This is my second year as a 10U All-Star, and we have definitely worked harder and grown so much from last year.”

That closeness has created a cohesive friendship among the girls that helps them through the highs and lows of competing together.

“I love the way all of us girls come together to lift up a teammate that may be down,” Ily Byrd said.

It’s created for memories that the young athletes will cherish moving forward.

“My favorite memory so far this season is my teammate Ily sliding into home plate in the bottom of the inning to score the winning run for the area championship,” Marlee Parsons said.

A fundraiser for the World Series trip is scheduled on Tuesday, June 26, 5-8 p.m. at Pelham Sonic by Oak Mountain Lanes.

By ALEC ETHEREDGE | Sports Editor While the soccer season in Shelby County didn’t conclude with as many state champions... read more