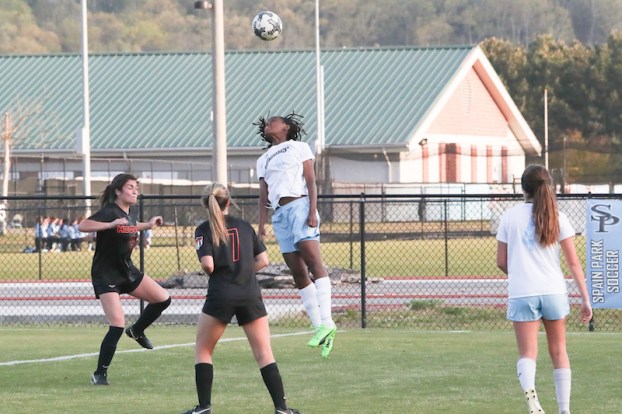 It was a complete sweep for the Spain Park Jaguars in two of the biggest soccer awards handed out at the conclusion of the 2018 soccer season after Jasmine Greene won the Gatorade Girls Soccer Player of the Year award for the state of Alabama.

The award, which recognizes not only outstanding athletic excellence, but also high standards of academic achievement and exemplary character demonstrated on and off the field, distinguishes Greene as Alabama’s best high school girls soccer player.

The 5-foot-8 junior forward scored 29 goals and passed for 15 assists this past season, leading the Jaguars (17-6) to the second round of the Class 7A state tournament.

Between Greene and Rice, who is a senior, the two talented Spain Park soccer players combined for 66 goals and 27 assists between the two of them as key leaders for their respective teams.

A three-time Birmingham News All-Metro first team selection, Greene moved into a defensive role late in close games. So far through her junior season, Greene has a total of 88 goals and 42 assists at Spain Par.

She has volunteered locally helping to organize and distribute gift bags to patients at Children’s of Alabama, and she has donated her time as part of multiple community-service initiatives through her church.

“Jasmine is just about the complete package,” said rival head coach Will Patridge of Hoover High School. “She shows tremendous poise in front of and around the goal area. Jazz is so shifty and always seems to find the seams and pockets of space in the final third.”

Greene has maintained a weighted 4.11 GPA in the classroom and has made a verbal commitment to play soccer on scholarship at Furman University beginning in the fall of 2019.

The selection process is administered by the Gatorade Player of the Year Selection Committee, which work with top sport-specific experts and a media advisory board of accomplished, veteran prep sports journalists to determine the state winners in each sport.

As a Gatorade Player of the Year, Greene will be able to select a national or local youth sports organization to receive a grant as part of the Gatorade Play It Forward program.

Every Gatorade Player of the Year state winner receives a $1,000 grant to donate and will have the opportunity to enter for an additional $10,000 spotlight grant by writing a brief essay explaining why their selected organization deserves additional support.

By ALEC ETHEREDGE | Sports Editor PELHAM – After their inaugural season in the Southern Professional Hockey League, the Birmingham... read more