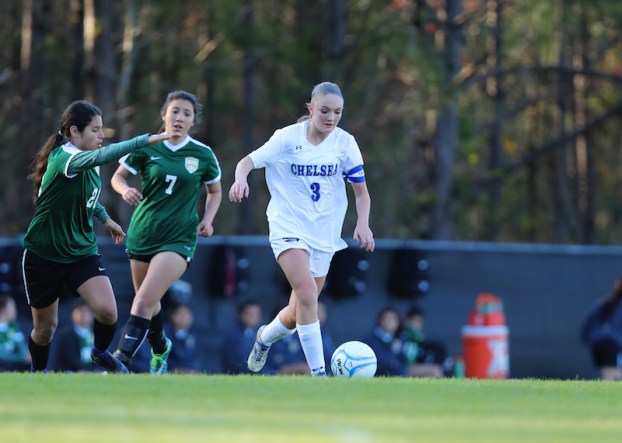 Chelsea’s Lexie Duca was named to the All-County first team after a stellar junior season for the Hornets. (For the Reporter/Cari Dean)

While no girls soccer team won a state championship in 2018, the talent across the board was as strong as it has ever been in Shelby County from the 7A classification all the way down to the 1A-3A classification.

Below, the talented players who graced the county this season are highlighted on the 2018 edition of the All-County girls soccer team.

Forward: Haley Greene, junior, Spain Park. A Memphis commit, Greene ended her junior season with 37 goals and 27 assists to lead the county in both categories. Easily one of the best players in the state this year, she was part of the Spain Park Greene duo that was unstoppable in 2018.

Forward: Jasmine Greene, junior, Spain Park. The second part of that duo was Jasmine Greene, who is committed to play collegiately at Furman. Jasmine posted 28 goals and 15 assists for the Jags and was a Gatorade Player of the Year nominee.

Forward: Virginia Hunt, freshman, Indian Springs. Hunt was an integral part of Indian Springs’ Final Four team this season after posting 30 goals and 14 assists. Her offensive prowess was up there with the best in 2018.

Forward: Kailey Littleford, sophomore, Chelsea. Offensively, Littleford was the one who made this Chelsea team go. She ended her sophomore season with a team-high 24 goals and tacked on 15 assists.

Forward: Hailey Whitaker, senior, Oak Mountain. Whitaker finished just behind Greene with a total of 33 goals to take second in the county in that category, while she tied with Greene in total assists with 27. An Auburn University commit, she has been one of the best players in the county for several years.

Midfield: Julia Pack, senior, Oak Mountain. Pack and Whitaker will continue to be teammates next year as she is also committed to Auburn, which sets up a dangerous duo. Pack ended her final season with 18 goals and 16 assists despite a heartbreaking injury late in the year. She was also named a Gatorade Player of the Year nominee.

Midfield: Morgan White, sophomore, Westminster at Oak Mountain. White is one of the best overall athletes in the county in any sport boys or girls. She ended her sophomore season on the soccer field with 33 goals to finish in a tie for second in the county.

Midfield: Lexie Duca, junior, Chelsea. While Duca’s seven goals were good enough, her 20 assists helped spur the team. She led the team in that category and had a way of making her teammates better be leading them with great passes.

Midfield: Gracie Davis, junior, Calera. Davis played a lot of defense this season, but was still able to manage 22 goals and 11 assists along with 52 saves. She is a hard-working player who can play anywhere on the field that she is needed.

Midfield: Logan McFadden, senior, Indian Springs. When she turned on the speed, McFadden was one of the fastest and most dominant players in the county. She posted 21 goals for Springs this year and added 16 assists to earn the Metro Player of the Year award.

Defender: Maddison Martin, senior, Chelsea. Committed to LSU, Martin has been a four-year starter at Chelsea and one of the best defenders in the county. The defense took on a lot of pressure this season, but she was able to anchor some strong games.

Defender: Zoe Guzman, junior, Calera. As a defensive midfielder, Guzman posted 13 goals and an even more impressive 22 assists this season for the Eagles. Her 22 assists spoke to the anticipation and vision she has for each play during the game and something that created plenty of opportunity.

Defender: Madeleine Davis, senior, Indian Springs. Her offensive numbers don’t stand out with just two goals and one assist, but Davis was the anchor of a defense that pitched five shutouts and made a run to the Class 1A-3A Final Four.

Defender: Peyton Poe, senior, Thompson. For the last two years, Poe has stood out to me for the way she handles herself on the field. She was a key defensive player for a Thompson team that continues to improve. She deserved this spot in her final season.

Goalkeeper: Jamila Wilson, senior, Pelham. You wouldn’t have known it was Wilson’s first year playing soccer by the way she handled being the team’s goalkeeper. She helped the team reach the playoffs and posted 13 shutouts, while giving up two goals or less in all but two games.

Forward: Melanie Brannon, senior, Thompson. During her senior season, Brannon posted 18 goals and 12 assists to lead the Warriors. She will now move on to play at the University of Alabama-Huntsville.

Forward: Taylor Davis, freshman, Helena. As a freshman, Davis had 26 goals and eight assists including five hat tricks this season after putting 54 shots on goal. With her coming back for the next three years, the Huskies have a bright future.

Forward: Michelle Hernandez, sophomore, Pelham. Hernandez had 18 goals to lead the way for Pelham this season, including five game-winning goals. None of those five were more important than the two against Helena that propelled the Panthers into the postseason.

Forward: Danielle Retief, sophomore, Oak Mountain. Retief quietly added 16 goals and 20 assists for the Eagles this season and will be one of the future stars for the team with Whitaker and Pack both graduating.

Forward: Alex Broughton, senior, Briarwood. It wasn’t the season Briarwood wanted, but a lot of the scoring pressure was on the shoulders of Broughton and she handled it about as well as she could have, posting 12 goals and five assists during her senior season as the team captain.

Midfield: Kayla Wiggins, senior, Spain Park. Overshadowed by what both of the Greenes did at Spain Park, Wiggins had a solid season for the Jaguars posting 11 goals and 11 assists. She was a big factor in this team’s success.

Midfield: Bailee Washington, eighth grade, Helena. A young player, Washington showed a lot of promise with her 14 goals and 10 assists this season. She also picked up 24 steals for the Huskies.

Midfield: Kori Ingram, freshman, Pelham. Ingram picked up 16 goals this season and totaled four game-winners for the Panthers. She also added eight assists and was another part of the impressive turnaround for Pelham in 2018.

Midfield: Brooklyn Owens, junior, Calera. A consistent midfielder, Owens’ shot-making ability was impressive. She only had two assists this season, but was able to put 15 goals in the back of the net.

Defender: Alyssa Young, senior, Spain Park. One of the best defenders in the county and the best defender for Spain Park, Young ended the year with five goals and 11 assists after starting things in the backfield. She is now headed to UAB next year.

Defender: Ellie Sherrod, junior, Briarwood. Sherrod was a player that could spring an offensive fast break after some big stops in the middle of the field defensively. She ended her junior year with nine goals and two assists.

Defender: Anaya Hunter, senior, Oak Mountain. Committed to Georgia Southern, Hunter was the best defender on one of the best teams in the state this season as she led Oak Mountain in the backfield.

Defender: Herandy Medrano, sophomore, Pelham, and Jacqui Adan, senior, Pelham. Both players were deserving defenders that earned a spot on this team after a special season for Pelham. Medrano scored six goals this year after playing in every game and was named the team’s defensive MVP. Adan scored eight goals and tacked on 11 assists and battled back from an ankle injury to be a part of a special season.

Goalkeeper: Vivian Gray, freshman, Spain Park. Gray was helped out by a solid team in front of her, but the freshman was part of a team that combined for nine shutouts and allowed more than two goals just three times all season.

By ALEC ETHEREDGE | Sports Editor While the soccer season in Shelby County didn’t conclude with as many state champions... read more