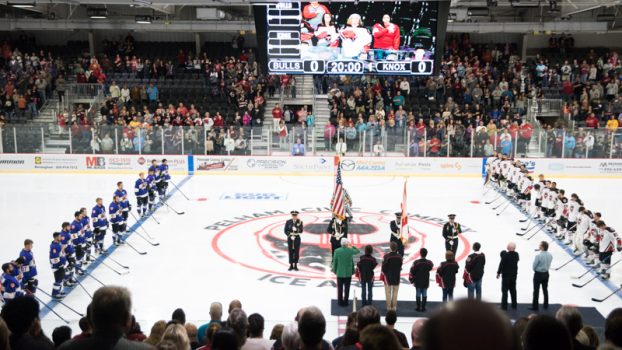 The Birmingham Bulls have released their 2018-19 home hockey schedule and will look to get off to a better start this season with two home games to start the year. (File)

PELHAM – Last year was a year of firsts for the Birmingham Bulls as they went through the ups and downs of an expansion team in its first year of play in the Southern Professional Hockey League.

The Bulls had to overcome several obstacles, but learned along the way both on the ice as a team and in the front office as far as promotions went.

By the end of the 2017-18 season, Birmingham had created an exciting product to watch that saw the Bulls vying for a playoff spot up until the final weekend of the season before they ultimately finished just six points shy of earning a spot in the postseason.

A big reason for that difficult ending to the year was really due to the start of the season.

The Bulls started the season with seven straight losses and eventually found themselves 16 games under .500 at 9-25 (including overtime losses) a little more than three months into the season.

At that point in time, Birmingham sat in last place in the SPHL.

While the Bulls had every reason to tuck their heads between their tails and give up on their first season, that was the last option on their mind.

Instead they went on a tear over the final two months of the season to battle for that final playoff spot. They went 13-2 over their next 15 games, before eventually falling back into a slump to end the season, but Birmingham had battled back to give itself a chance showing the experience gained in a short period of time.

Now heading into the 2018-19 season, the Bulls will have that knowledge of knowing that all it will take to make a strong push for a playoff spot during this upcoming season is to get off to a better start.

It should give them much more energy and fight early in the season. Even just going .500 during that stretch or slightly below .500 should be good enough with another new team in Quad City joining the league to replace the Mississippi RiverKings.

With the Bulls finishing 10 points behind the RiverKings, six points behind Roanoke and 20 points higher than last-place team Fayetteville, they should automatically improve their record just by the competition that the team should be better than.

Birmingham also just released the home portion of its 2018-19 schedule, which will kick off on Friday, Oct. 19, which gives them a home contest on the opening night of the season—a welcome sight after spending their first three games on the road to open the 2017-18 season.

The Bulls play a total of 28 home games this season, with five home games scheduled in November, December, January and March, two in October and April, and four in February.

Birmingham’s home schedule will come to an end with a two-game home stand on Friday and Saturday, April 5-6.

The team will also have a sound roster back with protected players including captain Craig Simchuk as well as forward Evan Schultz and goalkeepers Mavric Parks and Charlie Millen among others, which should create for an exciting product.

Season tickets are on sale now by calling 620-6870 or visiting Bullshockey.net.