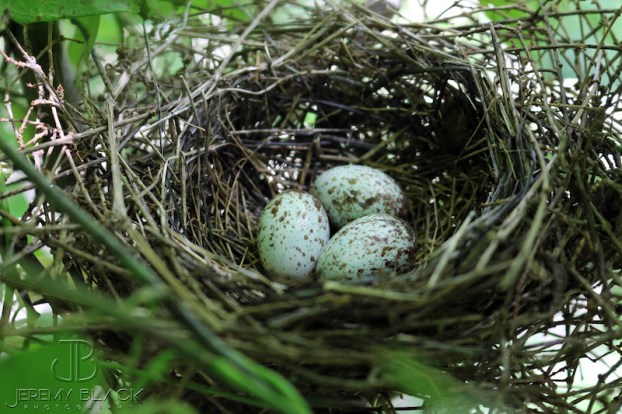 ALABASTER – The “one-in-a-million” Yellow North American Cardinal that was spotted in Alabaster earlier this year is expected to be the father of three more babies, according to local photographer Jeremy Black and local birder Charlie Stephenson.

On the afternoon of Tuesday, June 19, Black said he and Stephenson discovered three eggs in the nest of the bird, affectionately nicknamed “Mr. Yellow,” and his partner, “Mrs. Yellow.”

Black and Stephenson said they are currently in the process of figuring out when they were laid and when they will hatch. The average incubation period for North American Cardinals is 11-13 days.

While Black said they typically check to make sure the nest is safe every three to four days, he said he and Stephenson are now making a point to observe Mr. Yellow’s nest every day.

Previously, Mr. Yellow’s first brood hatched in early May. Those babies have since fledged and have been seen in the area a few times, according to Black.

When they first discovered Mr. Yellow in January, she said she was told by experts that the color of his feathers “sent the wrong social signals,” and would possibly never mate or reproduce.

“We are loving trying to disprove all of the things they said he wouldn’t be able to do.”

As of Wednesday, June 20, it is unclear as to whether any of Mr. Yellow’s offspring will inherit his unusual pigment.

By Brady Talbert / Staff Writer HELENA – While the children at Helena Elementary’s STEAM Camp may not have gotten... read more