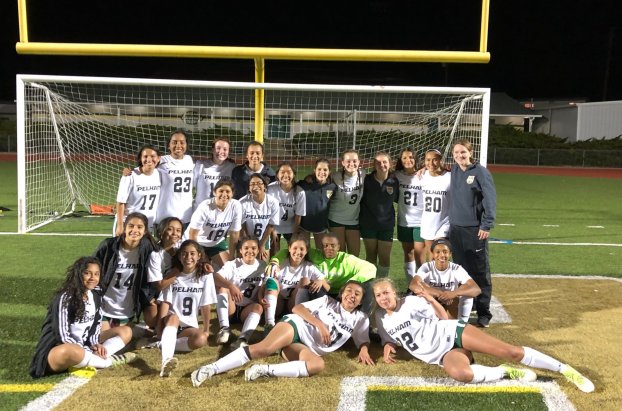 Pelham's Brittany Pollard was named the 2018 girls' soccer coach of the year after a stellar turnaround season for the Panthers. (Contributed)

PELHAM – For the first time in six years, Pelham’s girls soccer team found itself in the playoffs after a drastic improvement in large part due to head coach Brittany Pollard.

While the players, four of which were named to the All-County team, obviously had an impact on the outcome of each game and had to go out there and perform night in and night out, Pollard got them to believe not only in winning but themselves, which was the key to the team’s successful turnaround.

The Panthers finished 16-4-1 in 2018 with a 2-2 record in area play to finish second in the area and claim that elusive playoff spot.

Since their last playoff berth in 2012, Pelham had gone a combined 37-42. Not only that, but the Panthers hadn’t won an area game in the last six years and were able to not only win one this year, but a sweep against Helena led to two area wins, which was the difference in them advancing to the postseason.

The team was coming off of one of its worst seasons in the last six years after finishing 6-10 overall in 2017 and 0-4 in area play, but Pollard didn’t let her team focus on the past, but instead got them to believe they could go out and win every night.

Pelham came out and won its first five games to start the 2018 season, scoring at least four goals in four of those five games, which gave the team all of the confidence it needed moving forward.

While the first loss of the season, a 1-0 defeat at the hands of John Carroll, could have sent them spiraling into their past struggles, instead the Panthers responded with four more wins in a row, scoring two or more goals in each of the wins.

That gave Pelham nine wins in its first 10 games as they had already won four more games than 2017 within the first month of the season.

After that, the Panthers lost two of their next four games, but the two wins in that stretch came by finals of 6-0 and 7-0, while the two losses were to a very good Chelsea team.

Yet again, Pelham was able to respond with five wins in their next six games, with a tie in that six-game stretch. One of those wins came on April 19, as the Panthers took down Helena 1-0 in a game to decide their playoff fate.

While all of the wins were great, it was a loss to close out the season that really showed how far this year’s team had come.

Drawing the No. 1 team in the state in round one of the playoffs wasn’t the most welcome sight for a team that had played so well throughout the season, but then again, the challenge was something they looked forward to.

While Pelham went on to lose 2-0, it was a gutsy performance for the Panthers who challenged the eventual Class 6A state champions in a hard-fought first-round game. In 15 of John Carroll’s 24 games throughout the season, they had scored more goals or won by a wider margin of victory.

It was an impressive showing as the moment wasn’t too big for a team that capped off a special year with the same fight and desire it started with.

Now, with the continued leadership of Pollard and the return of a few young players, a new expectation and standard has been set for Pelham girls soccer moving forward.

By GRAHAM BROOKS / Staff Writer HELENA–It may be the dead of summer, but the baseball and softball fields were... read more