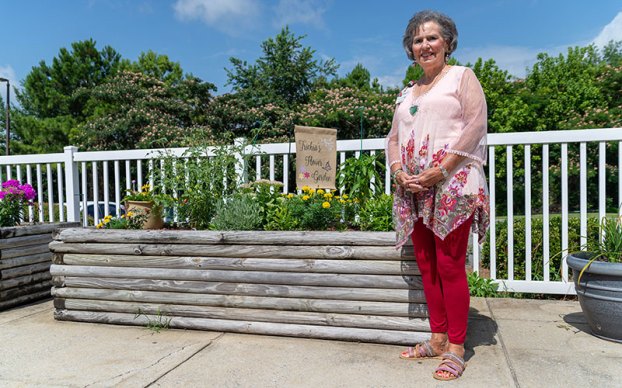 ‘God uses people where they are:’ Shelby Ridge resident lives life as ministry

She serves as the president of the Shelby Ridge Residents’ Council and has worked to organize bake sales and many fundraiser walks at the nursing home. But throughout the years, Bradberry said one of her responsibilities at the nursing home has been one of the most fulfilling experiences of her life.

“Being able to get close to those families and help them during a difficult time has been the best experience I’ve had here,” Bradberry said of her time volunteering with Affinity Hospice. “Being a comfort for the patients who are on hospice and providing that comfort for their families I feel is a big accomplishment in my life.”

Through volunteering with Affinity, Bradberry has developed lasting friendships with patients’ families – Some of who regularly visit her at Shelby Ridge. Bradberry also has built strong relationships with the staff and other patients and residents at Shelby Ridge since coming to the facility in 2007.

Although the transition from independent life to a nursing home was initially difficult, Bradberry said she now believes God placed her there for a reason.

“The first year was a struggle and difficult, because I had been independent for so long and had raised two boys as a single parent,” Bradberry said of her decision to become a full-time resident at Shelby Ridge after going through rehab there for injuries suffered in a fall at her apartment. “But even while I was struggling with my new permanent home, the staff saw something in me I didn’t see at the time. The staff could see my love for God and putting him first, and my desire and passion to help others.”

Bradberry said she now views the nursing home staff as a second family, and has played in several golf tournaments with Shelby Ridge owner Chris Schmidt. Every Wednesday, she distributes the Alabaster Reporter to the patients and residents at Shelby Ridge, and has worked to make Birmingham Christian Magazine available in the building’s main lobby.

She recently planted a three-bed flower and produce garden on the facility’s patio, which has already begun producing Tommy Toe tomatoes and bell peppers.

Bradberry said she seeks to live with a positive attitude every day, and said she believes God placed her at Shelby Ridge to make a difference in other peoples’ lives.

“I feel like God put me here at Shelby Ridge as a missionary,” Bradberry said. “Some people leave the state or the country to be a missionary, but God uses people where they are too.”

By GRAHAM BROOKS / Staff Writer HELENA–Laughter could be heard all throughout Helena City Hall the morning of Wednesday, June... read more