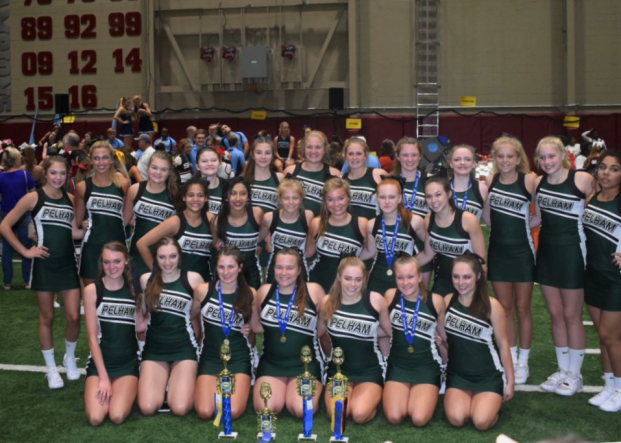 Pelham High School’s varsity and junior varsity team pose for a picture with the trophies and medallions they won at the UCA Summer Camp. (Contributed)

The two teams attend the camp every summer to learn defense, offensive and time out cheers, to work on tumbling and stunts and to learn new hip-hop and pep rally dance routines, among other things, said cheer coach Jean Coker.

“This is the first year that I can truly say that this is one of the best groups I’ve taken to camp,” Coker said. “They stuck with it and really did well over those four days. Attitudes were great and they worked very hard.”

The girls were among 44 other teams, which amounted to about 800 cheerleaders, from all over the southeast.

“The environment can be a bit overwhelming, but they handled it well,” Coker said.

Coker said each coach picks cheerleaders from their teams that they feel are the best and then those girls tryout for the All-American team. Coker said being named an All American is the first step in becoming a UCA cheerleader.

“That’s the goal for a lot of our girls,” Coker said.

Coker said she and assistant coach Rachel Lovett are so proud of their accomplishments and how hard they worked.

“We are really looking forward to this upcoming season,” Coker said.

By SETH HAGAN | For the Reporter  PELHAM – At 27 years of age Bill Strickland is taking over the... read more