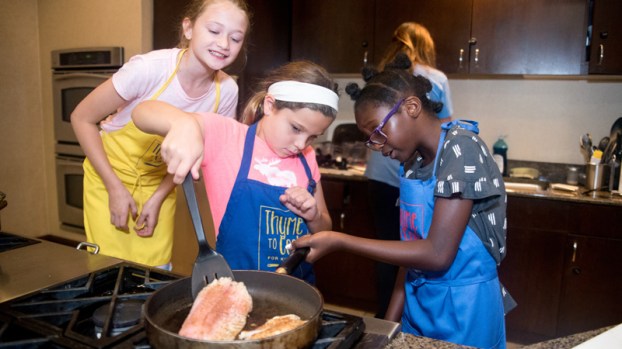 NORTH SHELBY – Aspiring chefs and those just beginning to explore food preparation are taking part in the Thyme to Cook for Kids camps at St. Vincent’s One Nineteen this summer.

“Most of them, their parents tell us they love cooking, they watch the cooking shows, they want to be a chef, but with others we are teaching the most basic cooking skills,” St. Vincent’s One Nineteen Dietitian Donna Sibley said.

The “Savor the South” program took the participants on a culinary tour around the region, with recipes ranging from grilled peaches with honey and yogurt from Georgia to beef empanadas from Texas to spicy roasted okra from Louisiana.

A different state was highlighted each day, with participants learning a bit about the state, what makes its cuisine unique and then preparing various entrees, sides, desserts and snacks—all with a focus on healthy ingredients and preparation.

One Nineteen Director of Health and Wellness Services Jacqueline Gardner said her daughter went through the camp, which empowers the children and builds confidence in their abilities.

“It’s real food. It’s not kid food,” Gardner said. “These are skills they can take home and use the rest of their lives.”

Lexi Holderby, 13, participated in the camp for the fifth year—this time as the first ever junior counselor.

Holderby, who lives in North Carolina but attends the camp each year while visiting an aunt who works at One Nineteen, supervised her own group during the camp and said the most important lesson she hoped to share was keep chemicals, such as those used for cleaning, away from food being prepared.

Of all the recipes she has completed during the camp, Holderby said blackberry jam was her favorite because she was able to share it with loved ones.

“When I took it home, everyone liked it,” she said.

“I was making something to eat, and I was adding extra ingredients, spices and stuff, to make it taste better, and my mom asked if I would want to go to cooking camp,” said Hawkins, 11, as he and his group prepared “Florida Sunset Spiced Tilapia.”

The program teaches curious kids how food works, with explorations in various cooking techniques and flavors.

“They can eat something, but it’s nice to know how it got there,” Sibley said. “It’s healthy eating in the context of making it fun.

“Some parents report that their child learned to eat a certain vegetable/food in cooking camp and now has worked it into their taste preferences,” Sibley said. “Picky eaters are more likely to eat foods they don’t think they like under peer pressure and if they make it themselves. It may take 13-20 tries for a child to taste a certain food they don’t like before they start eating and liking a food that they previously wouldn’t eat.”

The cost to participate is $225 per session.

For more information or to register, call 408-6550, visit the Wellness or Fitness desks at St. Vincent’s One Nineteen for an application or download from OneNineteen.com.