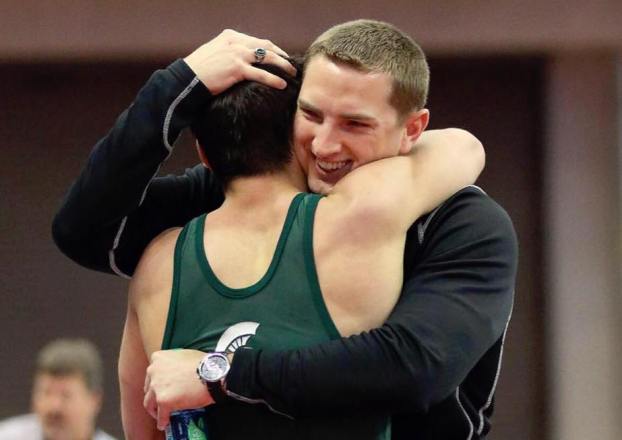 Bill Strickland has been named the new head wrestling coach at Pelham High School after success as an assistant varsity coach and head middle school coach in recent years. (Contributed)

PELHAM – At 27 years of age Bill Strickland is taking over the Pelham Panthers’ wrestling program.

Just a decade removed from his days as a competitor himself, Strickland may seem a bit young getting his first shot to lead his own program, but that would be judging the book by its proverbial cover.

Pelham’s Director of Athletics, Kim Kiel, believes Strickland has the experience necessary to take that next step towards prominence.

In reality, Pelham High School is getting a well-rounded–not to mention well-traveled–head coach.

Strickland was a two-sport letterman at Hewitt-Trussville High School and was named captain by his teammates his senior year.

His leadership on and off the field made coaching a natural fit and he quickly transitioned to assisting both the football and wrestling programs at Mountain Brook High School where he spent the next eight years cutting his teeth while also obtaining his degree in Social Science Education at UAB.

He’s also fully aware of his age, but knows he’s prepared for this moment and confident in what he can bring to the team.

“Excitement, passion, energy,” Strickland proclaimed. “I’m a young guy, this is my first head coaching job, and while I may not have as much experience as other head coaches, I have a lot of experience being with top tier head coaches. Whether it be with Mark Snider at Hewitt or Justin Ransom at Mountain Brook.

“So I’m bringing everything I’ve learned along with a lot of energy and enthusiasm to build a winning, competitive culture here at Pelham.”

That championship pedigree led to opportunities with the Jasper Vikings during the 2016-17 school year, and then a return to his old stomping grounds at Hewitt-Trussville last year, but not before he took a year to teach English in Ibiza, Spain.

Strickland has also vacationed in Italy, so despite being a homegrown product here in Alabama, he definitely has a heightened perspective and a coaching philosophy that’s constantly evolving.

He attributes much of that to his two coaches and mentors at Hewitt-Trussville, Mark Snider and Jack Burton.

“They taught me that you get out what you put in, and if you’re not working hard and willing to learn and evolve that’s going to come back and bite you,” Strickland said. “They also taught me hard work, mental toughness and the fact that you’re going to get pushed around and even broken, but you have to keep fighting.”

Strickland was finally given the reigns of the middle school team at his alma mater last fall and didn’t disappoint as his Huskies dominated, especially at the Birmingham Metro Tournament.

The term “placers” refers to wrestlers who place third or higher in their weight division–no small feat considering there are just 14 weight classes in all.

Working with young wrestlers just beginning their own careers allowed Strickland to continue to hone his own methods that he’ll take into the upcoming season.

“That was one of the big lessons I learned last year: they’re going to learn from me, I’m going to learn from them,” he said. “Not every single wrestler is going to wrestle the same way, each of them are going to have their own style, and I have to play to their strengths within their style and teach them how to use them throughout the match.”

Kiel identified those same traits in Strickland and is eager to see him match those with Pelham’s rising talents.

“Coach Strickland employs a skill set and the experience to advance the level of wrestling at Pelham,” she said. “His ability to align his skills and knowledge with that of our athletes will be paramount to his success at PHS.”

Strickland wants the Pelham faithful to know they’re getting a coach who will attack this opportunity with a fresh energy while looking to prove he’s worthy of his new title.

“I just want to bring a competitive spirit. We’re going to go out and compete for six minutes, work our tails off and learn and grow through every experience whether that be a win or a loss,” says Strickland. “I’m excited to develop this program into my own. To bring my style and everything I was as a competitor and a coach and bring that to the team, because a team is just a reflection of the coach.”

Strickland feels the timing is right and the pieces are in place to compete for championships in due time.

Pelham fans should expect wrestling to be on the rise in this new era.

“We have all the outside resources, the parental support, the administrative support, and we have all the facilities that we need to be right up there at the top,” Strikcland said. “And luckily I’ve been blessed to head the ship and that’s what I plan on doing: Taking Pelham where they’ve, quite frankly, never been before.”

By ALEC ETHEREDGE | Sports Editor VINCENT – Vincent’s football program has been on an upward trend the last two... read more