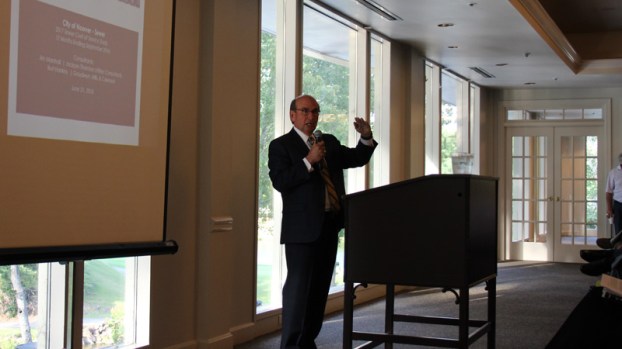 HOOVER – Hoover officials are not interested in selling the city’s sewer systems, but rate increases could be forthcoming, residents learned at a town hall meeting on Thursday, June 21.

Brocato said the sewer rates are one of several “difficult” situations being addressed by city officials, as the mayor recently proposed a 1-cent sales tax increase to avoid future budget deficits.

“You didn’t hire me to make political decisions that would be popular,” Brocato said.

Brocato stressed that the sewer systems’ finances are separate from the city’s general fund, and that he is not in favor of selling the systems to a private company—“It would be a disaster,” he said—or creating an oversight organization separate from the City Council.

Hoover owns two treatment systems, one in Inverness and another in Riverchase, that together serve about 4,500 residential and 200 commercial customers.

Needed capital improvements to the systems and a lack of rate changes over the past 14 years as new regulations and debt acquired for maintenance projects have combined to create an annual shortfall of about $2.35 million that officials hope to recover through rate increases.

Covering the shortfall could result in rates almost doubling from the $36.66 monthly bill—for an average household consuming 6,000 gallons of water per month—to about $67 per month.

Capital improvements over a five-year period would address lift stations, warning systems and pipeline/manhole rehab replacement, among other projects.

Rate funded capital combined with operations and maintenance, debt service and reimbursement of retained earnings create an annual need of about $6.34 million, with current rates producing about $4 million.

Rice, Lopez and Westhoven answered questions from residents about the city’s general fund supplementing the sewer systems, whether the City Council would hold public hearings prior to enacting rate increases, what the systems’ current debt funded and how the rates compared to neighboring systems.

Officials indicated public hearings would be likely, and said much of the debt was related to previous capital projects.

Rice said using Hoover’s general fund revenues to supplement sewer service for a fraction of the city’s population would be unfair.

“These systems are intended to operate in a self-sustaining manner,” Rice said.

County teams compete at Cornerstone 7-on-7