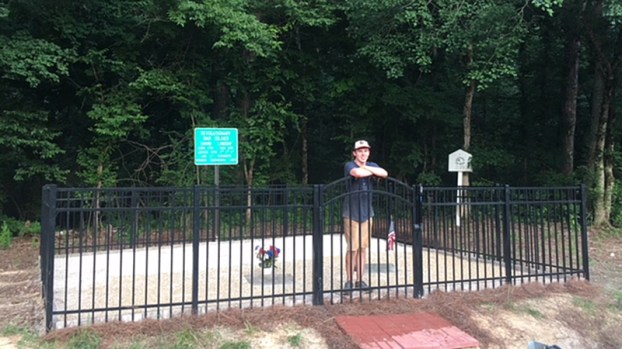 David Lindsay Historical Cemetery located on Highway 17 in Alabaster has been renovated by Eagle Scout Caleb Jones, Boy Scout Troop 532, of Helena with a new fence and improved grounds. (Contributed)

By PHOEBE ROBINSON / Special to the Reporter

MAYLENE – Helena resident Caleb Jones has completed the renovation of the David Lindsay Historical Cemetery for his Eagle project. The historical cemetery is located on Shelby County 17 north of its intersection with Kent Dairy Road in Maylene and is named for Revolutionary War patriot and Shelby County pioneer settler David Lindsay.

Jones is the son of Ken and Peri Jones of Helena. He graduated from Helena High School where he was a member of the Scholars Bowl team, History Club and played trumpet in the band. His family are members of Riverside Baptist Church where he played in the praise band. Jones received the Spirit of Auburn Scholarship and will be attending Auburn University in the fall majoring in chemical engineering. Jones has been a member of Boy Scout Troop 532 since a Tiger Cub in 2006 to Eagle Scout in 2018 led by Scoutmaster Jason Vandiver. Steve Edsall was Jones’ Eagle master.

Coincidently at the same time, the David Lindsay Chapter, Daughters of the America Revolution, had chosen for their Alabama Bicentennial project to place new markers at the cemetery and grave. The chapter had placed the original fence and existing markers on Alabama Day 1953. Since that time, the marker information was proven to be incorrect.

Jones raised the funds for cleanup, new fence and ground cover, total cost of project $2,795.15. After months of planning, Jones organized 21 volunteers from March 25 – June 2, and it took more than 128 hours to finish the project.

“Completing this project has taught me patience and perseverance,” said Jones.  “I faced many challenges but kept on going. I am pleased with the final design.”

By NEAL WAGNER / Managing Editor ALABASTER – The city’s Public Works Department likely will be able to move into... read more