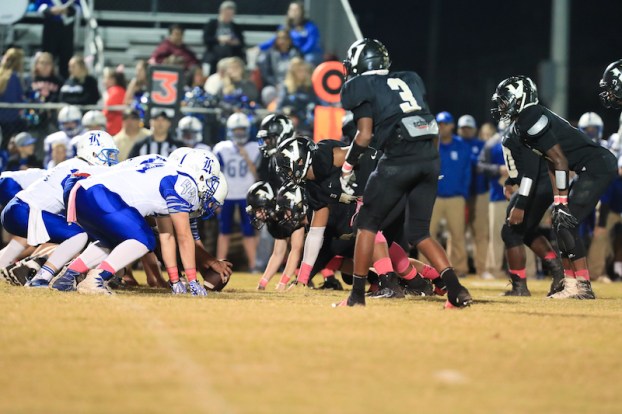 The Vincent football team switched regions during the recent reclassification, which took two tough opponents off of the Yellow Jackets 2018 schedule. (File)

The Vincent football team will be under new leadership during the 2018 season after former head coach Wiley McKeller departed for James Clemens High School.

While McKeller did an outstanding job of turning the Yellow Jackets around from a winless season the year before he got there to a five-win team that missed the playoffs by one game in his second year, Lucas Weatherford now has the opportunity to continue that success.

The schedule has some positives that should help Vincent and Weatherford continue that success during the upcoming season with the return of several key playmakers.

The Yellow Jackets will have a chance to gain a lot of confidence early with three home games and a bye week in the first six weeks of the season.

Vincent’s first home game will come on opening night of the AHSAA season, as the Yellow Jackets will play host to White Plains High School on Aug. 24.

White Plains, albeit a Class 4A team, is coming off a 1-9 season, which gives Vincent a chance to start with a confidence-building win outside of region play.

That will lead into the Jackets’ first road game of the season a week later when they travel to take on the Holy Spirit Saints.

It’ll be a drastic shift for Vincent, who will go from taking on a 4A team down to a Class 1A school. Being a classification higher, and with the Saints coming off a 4-7 season, it should give the Yellow Jackets a chance for a 2-0 start.

The first major challenge will come in week three of the season on Friday, Sept. 7, when the Yellow Jackets welcome region foe LaFayette to Vincent.

Last year, the Bulldogs finished the season 9-3 and as runner-up in Class 2A, Region 5. That being said, Vincent was able to compete with LaFayette in a tight game before falling by a final of 24-8.

While the Yellow Jackets are going to compete for a playoff spot and have a strong chance of making it, knocking off LaFayette is still a tall task. If it does happen, which it should be a close game again this year, then Vincent will have all of the confidence in the world moving forward in region play.

After that grueling game, the Jackets will get a deserved bye week before traveling to take on the Thorsby Rebels.

The Rebels stay in their region, while Vincent moves into Region 4 with several other teams that were a part of Region 5 last year.

Thorsby is a new challenger for Vincent, and will present a difficult game after having one of their better seasons in recent history during the 2017 football season in which the Rebels went 8-3 overall.

Following that test, Vincent will host Winterboro for its homecoming game. The Bulldogs are another average 1A team that finished the 2017 season with a record of 5-6 and a first-round playoff exit in a 64-0 loss to Georgiana.

Central Coosa will also represent a challenge after the reclassification this year thanks to its move from Class 3A down to 2A.

That being said, Central Coosa went 0-10 last year in Class 3A, Region 3 and was shut out in six of its 10 games and scored six points or less in eight of its 10 games.

Last year, Vincent was able to edge out Horseshoe Bend by a final score of 32-22, which ended up being the difference between the Yellow Jackets at 3-4 and the Generals at 2-5.

It should be another good game this year, but Horseshoe will be coming off a bye week and have home field advantage.

Vincent will be rewarded with a two-game home stand after that road trip when they take on Reeltown and Fayetteville in back-to-back games to close out region games.

Reeltown was one of the two teams that just edged out the Yellow Jackets for a playoff spot last year after picking up a 48-15 win head-to-head and finishing with 5-2 region record.

After that contest, which should prove to be a difficult test, Vincent will close out its home schedule with a game against the Fayetteville Wolves.

It’s a game the Yellow Jackets won 38-7 last year, as the Wolves failed to score more than seven points in seven of their 10 games, which led to a final record of 1-9 and last place in the region.

After that two-game stretch that could determine Vincent’s playoff outlook, they’ll hit the road to close the regular season out against Class 4A Ashville High School, which finished 4-6 a season ago.

Probably the most notable part of Vincent’s 2018 schedule is the absence of both Lanett and Ranburne.

Lanett finished last year a perfect 15-0 after winning the Class 2A state championship, while Ranburne ended the Yellow Jackets’ hopes of a postseason spot after taking down Vincent 24-10 in a region finale that put Ranburne in the playoffs.

By ALEC ETHEREDGE | Sports Editor VINCENT – Vincent’s football program has been on an upward trend the last two... read more