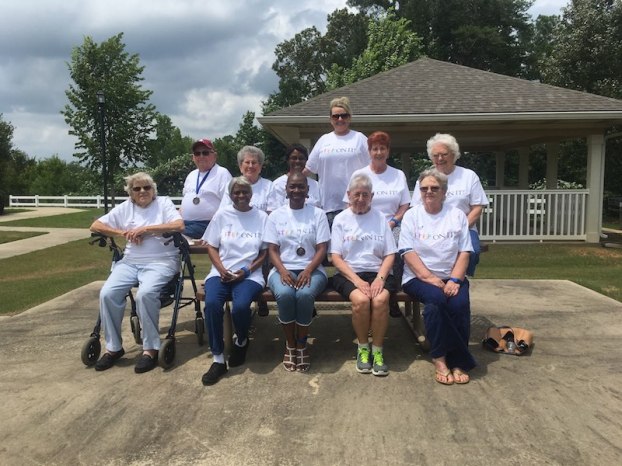 Almost a dozen local senior adults who are part of the Step On It program walked a combined total of 246.7 miles in one month. (Reporter photo/Amalia Kortright)

Step On It program promotes exercise for seniors

COLUMBIANA – A number of local seniors have recently exceeded their exercise goals for the month of June as part of the Step It Up program at Shoals Mill.

The Step On It program is provided by Kindred Home Health of Sylacauga and encourages senior adults to stay active.

“We give everybody a pedometer, a T-shirt and a calendar every month,” nurse Wendy Chappell said. “They’re responsible for tracking their steps.”

According to Chappell, the program’s goal is to prevent falls and injuries, as well as improve mobility. She also said it gives them a chance to get to know one another.

“They hold each other accountable, and it’s fun,” Chappell said.

Each month, she said each senior’s miles are calculated and combined. This month’s goal was to walk 56.5 miles, the equivalent of the distance between Shoals Mill and Peach Park in Clanton, and Chappell said they walked a combined total of 246.7 miles.

To celebrate, seniors attended a “peach party,” where they ate peach pies and peach ice-cream and were recognized for their work during an awards ceremony. Senior Johnny Jones took home the certificate for walking the longest distance, with 71 miles.

Many seniors said that they had lost weight since starting the program and have also noticed a decrease in blood pressure.

Senior Hattie Brown said she was inspired to become a part of the Step On It program by another senior who ended up becoming her friend.

“I got my inspiration from Denise,” Brown said. “When I first saw her walking, I said, ‘I want to do that.'”

Senior Rosie Lee stated that she is able to walk for longer periods of time before getting tired.

Chappell said the Step On It program is currently open to new members. She said members do not have to be Shoals Mill residents, but they do have to be part of a local independent assisted living facility.