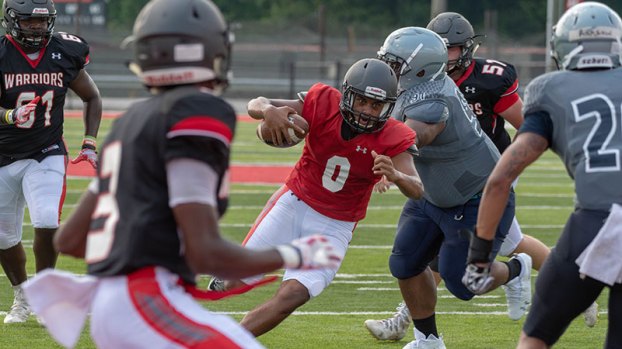 Thompson High School quarterback Taulia Tagovailoa finds room to run during the Warriors’ spring scrimmage against Clay-Chalkville in late May. THS will kick off the 2018 season at the Champions Challenge in Montgomery on Aug. 24. (Reporter Photo/Neal Wagner)

ALABASTER – The Thompson Warriors will kick off the 2018 football season by taking part in the annual Champions Challenge at Montgomery’s Cramton Bowl in late August, and will have their first home game at the new Thompson High School stadium in mid-September, according to the team’s schedule for the upcoming season.

Thompson, which is coming off one of the most successful seasons in school history at 12-1, will face fellow 7A team James Clemens out of Madison City Schools in the Champions Challenge in Montgomery beginning at 7 p.m. on Friday, Aug. 24. It will mark Thompson’s first-ever matchup with the Jets, who finished the 2017 season with a 3-7 record.

Thompson will return home on Oct. 26 to face Region 3 newcomer Hewitt-Trussville. The Huskies have seen plenty of success over the last several years, ending the 2017 season with an 11-1 record and a loss to Hoover in the second round of the playoffs. Thompson has only played Hewitt-Trussville eight previous times, with the Huskies currently holding a 5-3 advantage.

The Warriors currently only have nine games scheduled for the 2018 season, and have open dates on Sept. 28 and Nov. 1. On June 25, THS head coach Mark Freeman said the school was still working to find an opponent to play on one of those dates.

By ALEC ETHEREDGE | Sports Editor TUSCALOOSA – If you thought there would be any slowing down from the Thompson... read more