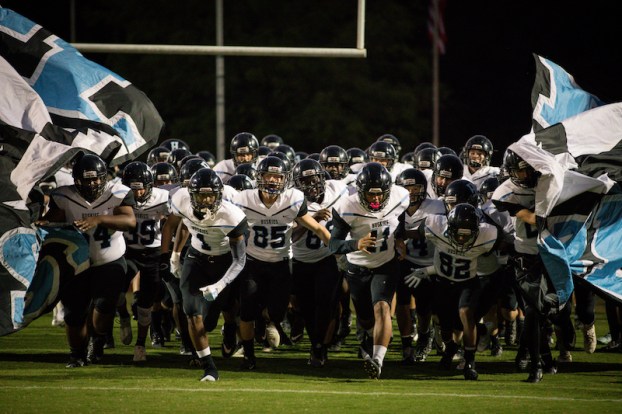 Helena will jump from Class 6A Region 3 to Region 5 in 2018 as they hope to find success under first year head coach Richie Busby. (File)

HELENA–Entering its fifth season in program history, a lot of changes will be seen as the Helena Huskies varsity football team takes the field for the first time in 2018.

As kickoff approaches in less than two months, now is a good time to breakdown the Huskies’ 2018 schedule and what changes Helena will see this season.

The biggest change for Helena this upcoming season starts at the head coach position, as Richie Busby enters his first season at the helm.

Busby replaces Watt Parker, who finished with an overall record of 18-25 and 13-13 in region play in four years with the Huskies.

Prior to taking over at Helena, Busby was head coach at Fultondale where he compiled an overall record of 40-17 in five seasons, won three region championships and made the playoffs every season at the 3A level.

Busby will try and turn around a Helena team that finished 1-9 in 2017 with the lone win coming against Chilton County in the second week of the season.

As Helena prepares for a turnaround season in 2018, the Huskies will face a much different schedule compared to a season ago after moving from Class 6A Region 3 to Region 5.

In all, Helena will face seven new opponents this season while keeping Homewood, Chelsea and Pelham on the schedule from a year ago.

Fortunately for Helena, this means the Huskies will drop Class 6A Region 3 frontrunners Wetumpka, Opelika and Benjamin Russell from its 2018 schedule. The three teams combined for a 29-10 record in 2017 as the Huskies went 0-3 against the trio in a brutal three week stretch last October.

As for non-region opponents, Helena will see a big difference compared to last season by dropping 7A teams Mountain Brook and Vestavia, as well as Pell City from the 6A level from the schedule.

Helena will open the 2018 season on the road against McAdory and will no doubt be a tough test. The Yellow Jackets finished 6-6 last season before falling to Carver Montgomery in the first round of the playoffs. McAdory has been consistently good under head coach David Powell as the Yellow Jackets have made the playoffs every year since 1997.

In week two, Helena’s home opener will feature another playoff team from a season ago as the Hueytown Golden Gophers come to town. Junior running back Roydell Williams will be a player to watch after making second team All-State as a sophomore.

Another tweak to the 2018 schedule includes a bye week in the third week of the season on Sept. 7. In previous seasons, Helena did not have a mid-season bye week as this could be beneficial as the Huskies prepare to open region play against Homewood on Sept. 14. The Patriots will be a tough region home opener as Helena looks to avenge a 30-point loss to Homewood from a season ago. The Patriots are the reigning Class 6A Region 5 champions after finishing 10-2 a season ago.

From there, Helena will get into the meat of the schedule with three straight road games at Minor, Southside-Gadsden and Chelsea. This three week stretch has the potential to shape how the rest of the season could go as all three will be winnable games on the schedule. All three teams failed to make the playoffs a season ago as a key game to watch will be the county matchup with Chelsea. Helena will look to break a four-year losing streak to the Hornets in a game that will be played on a Thursday night.

The backend of the schedule will feature three home games and a rivalry game on the road as Helena will try and get back to the playoffs for the first time since 2015.

Capping off the regular season will be two teams from Shelby County starting with a road game at rival Pelham on Oct. 26. This is no doubt a game the Huskies have circled on the calendar as the Panthers have narrowly defeated Helena by four points in back-to-back seasons. Pelham’s win against Helena a season ago propelled the Panthers to its first playoff appearance since 2013, as Helena hopes a win against Pelham late in the season will bode well for its playoff chances and bring bragging rights to the Huskies for the first time.

The final game of the regular season will be an intriguing matchup as Calera will travel to Helena on Senior Night. The Eagles will be led by senior All-State quarterback Cornelius Brown who has received heavy attention from several Division I schools in the last few months. Calera will also rely on other All-State players including offensive lineman Jayson Jones, defensive back Trent Yowe and kicker Zach Ford.

If Helena has locked up a playoff spot, this game against Calera could be a great challenge prior to the postseason as the Eagles will no doubt be one of the more athletic teams around.

After taking a look at who Helena will face this upcoming season, one thing the Huskies will try and improve from a season ago is its scoring average offensively.

Helena averaged just 12.4 points per game in 2017 as Busby and the Huskies will look to improve this number beginning with McAdory to open the season on Friday, Aug. 24.