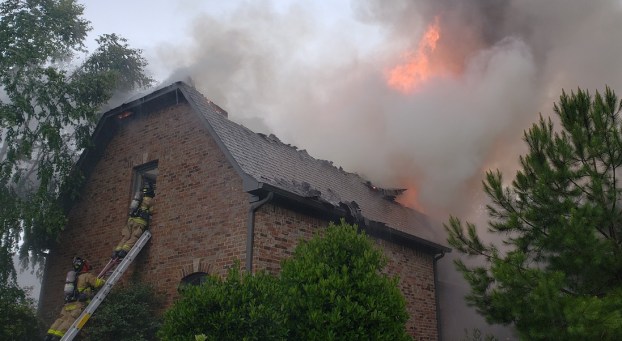 A house fire in Pelham's Ballantrae neighborhood damaged the roof, attic and second floor of a two-story home. (Contributed)

PELHAM – Pelham Fire Chief Tim Honeycutt said no one was harmed in house fire on Monday, June 26, that burned the entire roof off of a home located on the 100 block of Carnoustie Drive, near Ballantrae Golf Club.

Honeycutt said the fire department received a call about a house fire at 2:53 p.m. Four PFD and one Alabaster Fire Department engine responded to the call. Upon arrival, there was a heavy fire in the room above the garage and heavy smoke in the house. The fire quickly engulfed the roof and attic of the home and heavily damaged the second floor.

“The homeowner was at home when the fire started,” Honeycutt said. “She said she heard a loud boom and then the house shook.”

The cause of the fire is under investigation, and Honeycutt said lightning hasn’t been ruled out a possible cause.

“Our guys did an amazing job with a difficult situation,” Honeycutt said. “We couldn’t put up the ladder truck right away for safety reasons because it had been raining and lightning in the area. It was also difficult to get the ladder truck close enough to the house because of how narrow residential streets are.”

Once the lightning subsided, firefighters were able to utilize the ladder truck.

“That played a critical role in being able to get the fire out,” Honeycutt said.

Pelham Police Department officers were also on hand to provide assistance with traffic control as firefighters battled the blaze.

It took about two hours to get the fire under control. Once the main fire had been extinguished, Honeycutt said firefighters shifted their focus to putting out spot fires. Honeycutt said the house isn’t a total loss because some furniture on the first floor of the home wasn’t heavily damaged.

“I want to give a big thanks to our police officer and the Alabaster Fire Department for their help,” Honeycutt said. “It was a team effort.”

Pelham’s Fire on the Water set for July 1

PELHAM – The city of Pelham’s annual Fourth of July fireworks show, Fire on the Water, is set for Sunday,... read more