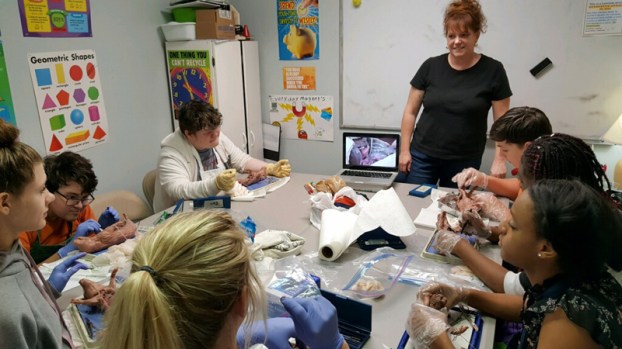 But Valleydale Christian Academy is instead a cover school for home-based education students—that happens to offer on-site classes.

Valleydale Christian Academy was founded in 1998, Director Susan Hubbard said, when she and her husband wanted to provide an alternative for their children, who were attending public school at the time.

“Back then, that was kind of a pioneer thing,” Hubbard said. “That’s how I became interested. It just kept growing.”

Classes began at the Academy in 2006. A staff of seven teachers lead instruction in core subjects and some electives each semester.

But the Academy’s primary purpose is serving as a cover school for home-based education students. Services include ensuring lessons follow the correct curriculum according to Alabama standards, maintaining records and providing transcripts when needed for graduation and enrolling in college.

Hubbard said many families dread the process of applying for college.

“It can be very daunting,” Hubbard said.

Valleydale Christian Academy serves about 300 families, some with multiple children.

There have been families who lived locally, became involved with the Academy, then moved away but continued their association from California and Tennessee, among other locations.

For some students, a smaller, more intimate setting like the one offered at home and at Valleydale Christian Academy just works better, Hubbard said, citing large classes and bullying as problems experienced in public schools and even private schools.

Potential students are vetted, and if they had behavioral problems in their previous school, they may not be allowed to attend classes on campus, Hubbard said.

“They’re making friends at school, so that helps a lot,” Hubbard said.

About 50 students in grades 5-12 are on site for classes each day.

Home-based education students can participate in sports and other activities at area high schools, and a cap-and-gown graduation ceremony is held each May at Jefferson State Community College, usually for about 40 graduates.

Last year’s valedictorian scored a 34 on the ACT and earned a scholarship to the University of Alabama Birmingham.

Valleydale Christian Academy is enrolling for the fall semester, which begins Aug. 1. Classes at the Academy begin Aug. 9.

A meeting for newcomers that would also be beneficial for those wanting to learn more will be held July 17.

By GRAHAM BROOKS / Staff Writer HELENA–Just because school is out for the summer doesn’t mean creative skills will be... read more