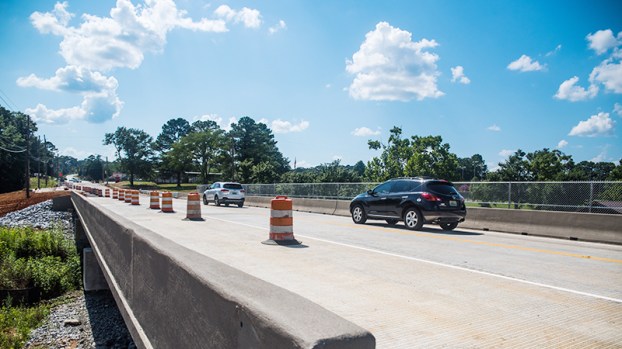 ALABASTER – A project to widen Thompson Road between Warrior Drive and Alabama 119 cleared a major hurdle recently, when a newly installed bridge over Buck Creek opened to traffic on June 25.

Crews repaved a stretch of Thompson Road near the new bridge overnight from June 24-25, and the new bridge opened to traffic on June 25. For the past several months, traffic was diverted around the bridge on a temporary bypass road while crews demolished the old bridge and constructed the new, wider bridge over the creek.

The bridge replacement was a major component of a project to add a new westbound turn lane on Thompson Road from Stadium Drive to Warrior Drive and add a sidewalk along Thompson Road from Warrior Drive to Stadium Drive. The new sidewalks will allow increased foot traffic from the old Thompson High School to the nearby Larry Simmons Stadium, which is used for many sports events.

Shelby County Engineer Randy Cole said the rest of the widening project likely will be completed in late fall.

The County Highway Department originally estimated the project would cost about $3.8 million, but said the low bid came in at about $3.5 million. Funding for the project will be 80 percent federal funding and the county will fund the remaining 20 percent.

Through the project, Shelby County is also planning to extend Buck Creek Trail from its current terminus at Warrior Park to the old Thompson High School campus.

In a separate project along the Thompson Road corridor, a developer recently added a Hardee’s restaurant and is making plans to add other developments near the Alabama 119-Thompson Road intersection.