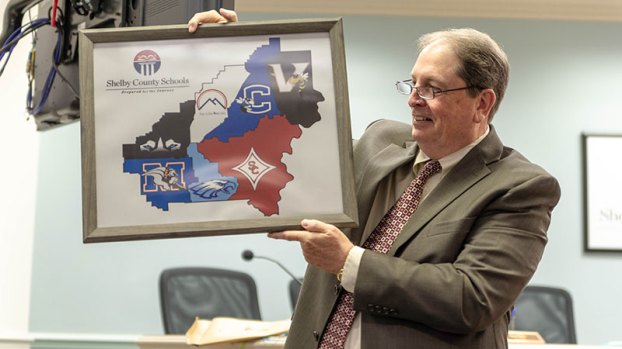 COLUMBIANA – When longtime Pelham High School principal and Shelby County Schools Deputy Superintendent Tom Ferguson came to PHS in 1991, he still vividly recalls the interactions he had with the parents there.

“When I came to Pelham, which was 28 years ago, some of the parents that I talked to said ‘We hope you’ll stay. Will you be our principal and just stay?’” Ferguson said. “(My wife) Signa and I knew we didn’t want to go anywhere else. We knew we didn’t want to move anymore. We stayed the course and we had a lot of fun.”

PHS was Ferguson’s sixth education job after starting in the field in 1974 working as a teacher at Jones Valley Elementary, then as principal at T.R. Wright Elementary, Banks High School and Albertville High School.

Ferguson served as the Pelham principal from 1991-2000 until taking a job with the Shelby County Schools central office as the district’s operations director and deputy superintendent, where he has worked for the past 18 years with the district’s leaders of transportation, facilities, maintenance and child nutrition.

After 44 total years in the education field, Ferguson is retiring from the SCBOE central office this summer.

On the afternoon of June 27, family members, friends, past and current co-workers and community members gathered at the central office to celebrate Ferguson’s dedication to the county’s children.

“We are here today to celebrate something very special that is so close to us. I told him this morning that I hated he was leaving, because he has been right there beside me for a long while and been a great confidant to me and a special person to me here during this time,” said Shelby County School Superintendent Randy Fuller. “I appreciate everything he has done. On behalf of everyone at the central office and our school system, I want to thank you for everything you’ve done. Tom, with his wisdom and experience, has been an integral part of the success of our school system.”

In addition to sharing fond memories of Ferguson’s time with Shelby County Schools, those at his retirement party also presented him with a framed map of the school system’s attendance zones designed by a former student.

“All these monumental times in your life that are just so, so special – You really don’t think a whole lot about retirement until you’ve got enough years when you begin to think about it. And when you start to think about retirement, you start to think about all the people who meant the most to you in your life and who helped shape your life,” Ferguson said. “To see so many of you here today is just a testament to how important it is to have friends, co-workers, people who mean so much to you in your life. This is so special, and I thank you from the bottom of my heart.”