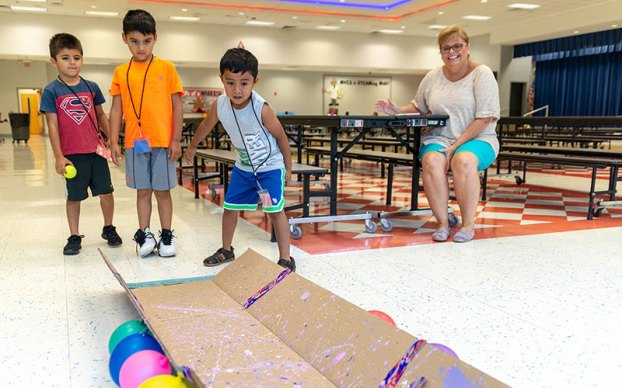 Students in Meadow View Elementary School’s English as a second language camp enjoy the student-created skee ball game on June 28, which was set up for the camp’s parent showcase the previous night. (Reporter Photo/Neal Wagner)

ALABASTER – Meadow View Elementary School’s cafeteria was filled with laughter and cheers on the morning of June 28, as dozens of children enjoyed everything from skee ball to miniature golf.

“They designed, created and engineered all of these games themselves,” said MVES English as a second language teacher Mandy Healtherly, who is leading the school’s ESL summer camp. “We wanted to be as hands-off as possible so they would be free to explore and learn from their errors.”

Since June 18, about 150 local children have been taking part in the ESL camp to hone and strengthen their English-speaking skills for the upcoming school year while taking part in fun activities.

During the first week-and-a-half of the two-week camp, the kids designed a slew of carnival games using only cardboard, tape and other simple materials in preparation for parent night on June 27.

The camp’s leaders gave each grade level at the camp a basic guideline for what they would be designing, and based each project off of English vocabulary the kids are focusing on this summer. The projects also featured science, technology, engineering and math lessons, Heatherly said.

During the showcase, hundreds of parents showed up to see what their children have been working on for the past several days. Alabaster School Superintendent Dr. Wayne Vickers and members of the ACS central office also attended the event to see the kids’ creations.

“The parents were as amazed as we were, and we had great support from the ACS central office,” Heatherly said. “It was fun for everyone to be able to see the finished product.”

“This is probably the best camp we’ve ever had here,” Heatherly said. “The kids worked so well together, and they were so creative.”