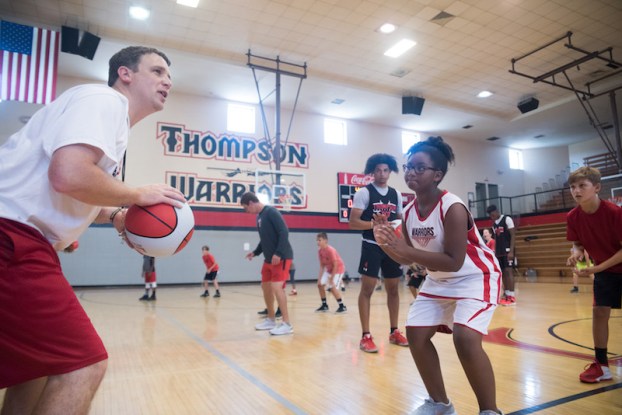 The Thompson boys basketball team hosted a camp from June 26-28 to teach the fundamentals of the game to young players. (Reporter photo/Keith McCoy)

ALABASTER – The Thompson High School boys basketball program is looking for a shot of adrenaline heading into the 2018-19 season, and it may have that spark in new head coach Dru Powell.

From Tuesday, June 26, until Thursday, June 28, Powell and the Warriors hosted their first basketball camp together at the old Thompson High School, which has helped build the buzz around town for the program moving into the 2018 school year.

“Something like this is the foundation of a program, and I think in order to build a program you’ve got to reach all the way down into the youth ages,” Powell said. “This camp has given kids interested in basketball the chance to have a lot of fun and learn about basketball.”

Putting on the camp with the help of his coaching assistants and varsity players, Powell explained the importance of the camp and the impact it could have for his team.

“We actually met with our varsity players the day before the camp to talk with them about the importance of hosting a camp the right way,” Powell said. “We wanted to make sure to reach every kid, make sure they had fun and make sure they learned something.”

Throughout the camp, the attendees learned the fundamentals of basketball, including dribbling, shooting, passing and defense with Powell saying there were two objectives in mind—having fun and learning something.

With his Warriors having competed at camps and in summer competition both at the University of Alabama and at Auburn University, Powell knew that his team was already in a good basketball mindset and had seen how to first class camps were held before hosting their own.

“That was a pretty big deal for us to go to both of those camps,” Powell said. “To do that in the same summer with a brand new coach has really gotten them excited. There is definitely a positive buzz about basketball around Thompson High School right now because of things like that.”

That excitement is something that is going to continue to grow as basketball season inches closer thanks to the Warriors unveiling their new first-class gymnasium for the 2018-19 school year.

“I’ve had multiple people come tell me recently that there is a good buzz about Thompson basketball around campus and around the community,” Powell said. “That gets me excited because it’s a direct reflection of the kids and the players.”

Powell also plans to build off of that buzz and create different tools to hype up basketball at the school.

At Spanish Fort, he took his team to compete in New Orleans, Louisiana so they could also make a pit stop to catch some NBA action at a New Orleans Pelicans game during the trip as well.

“I think these kids are excited and having fun playing basketball, and when that happens, really good things can happen for this program,” Powell said.

By ALEC ETHEREDGE | Sports Editor ALABASTER – Coming off of their best season in close to 30 years, the... read more