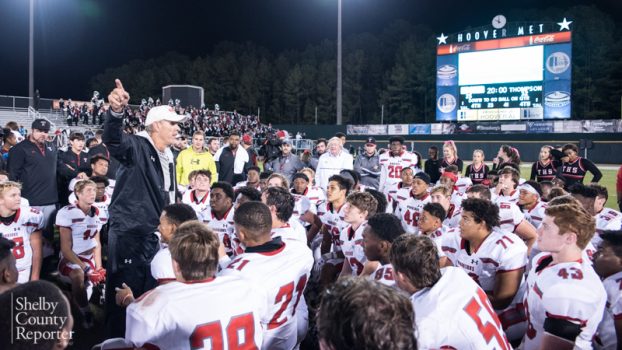 ALABASTER – Coming off of their best season in close to 30 years, the Thompson football program is giving young football players the chance to learn from a great football staff and one of the best teams the Warriors have had in school history at their upcoming Warrior Football Camp.

Kicking off July 9 and ending July 10, the camp will be hosted by head coach Mark Freeman, his impressive assistant coaches and several of the Thompson football players will help campers learn all of the fundamentals involved in the game.

The camp is open to kids in kindergarten all the way up to seventh grade and will last from 5-7:30 p.m. each day. Registration will open at 4:30 p.m. on the first day of the camp and if you are running late, a late registration will be open until 5:30 that afternoon.

The purpose of the camp is to teach campers the fundamentals of the game as well as proper technique so they can take the lessons learned home to practice and help develop themselves as players moving forward.

They’ll also be learning from some of the best high school players in the country as several of the Warriors’ starters are highly sought after recruits with plenty of college attention.

The cost of the camp is $50 per camper and each attendee will receive a T-Shirt and will get to participate in Warrior Ball.

Larry Simmons Stadium will play host to the youth camp and if you have any questions you can email Freeman at Mark.Freeman@acsboe.org.

If you would like to register online, you can do so at Thompsonwarriors.org, where more information on the camp will also be available.

By NEAL WAGNER / Managing Editor ALABASTER – The Thompson Warriors will kick off the 2018 football season by taking... read more