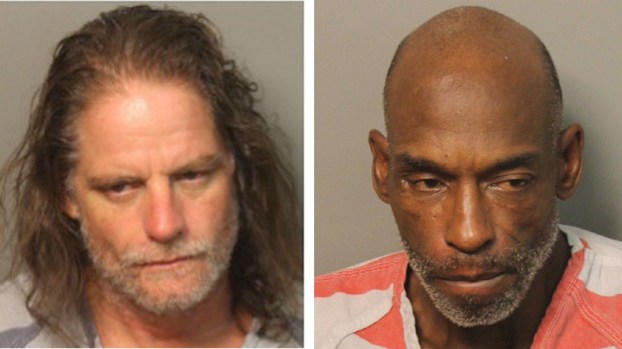 Terry Lynn Forehand, left, and Derrick Terrell Bivens, both of Mulga, face charges for allegedly robbing a bank in Meadowbrook—and returning to attempt to rob the same bank about three weeks later. (CONTRIBUTED)

Hoover police officers responded to a robbery in progress at BB&T Bank, located at 4705 Meadow Brook Road, at about 9:42 a.m. on June 27, according to HPD.

A suspect wearing a baseball cap and bandana covering his face allegedly entered the bank, jumped over the teller counter, grabbed an unknown amount of cash and attempted to leave through the front door.

One of the bank managers approached the suspect, and after a physical altercation, he dropped the money and fled into the parking lot, where he got into a vehicle driven by an accomplice and left the scene.

About 50 minutes later, the same two suspects allegedly robbed a Regions Bank in Graysville, according to police.

Shortly after the second robbery, FBI Safe Streets Task Force agents apprehended Forehand after he was dropped off at his residence in Mulga, the release stated.

The first robbery at the BB&T Bank occurred on June 7. In that case, a suspect wearing a baseball cap and bandana entered the bank, jumped over the counter, took money out of the teller drawer and fled the area in a vehicle, which became disabled after a short pursuit, and then two suspects fled the area on foot.