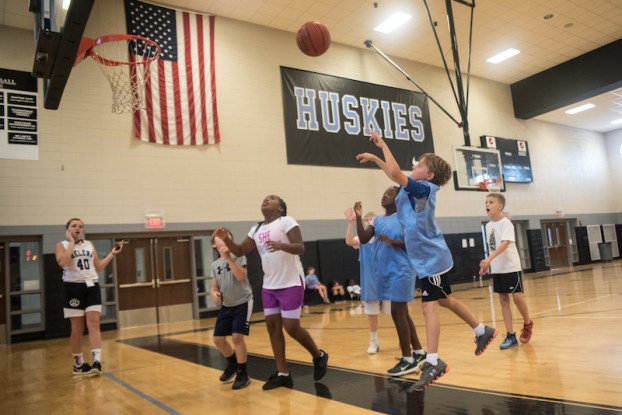 More than 60 kids attended the Helena Summer Basketball Camp the week of June 25 where they learned new skills and competed in a variety of competitions. (Reporter Photo/Keith McCoy)

HELENA–In a camp that balanced both skills and competition, more than 60 kids came out to the Helena Summer Basketball Camp the week of June 25, to learn fundamentals and also improve their game.

In the four-day camp, boys and girls in grades 1-8 were able to learn new skills from Helena High School boys’ and girls’ varsity players, as well as head coaches Alan Skinner and Bill Grant.

The camp was broken down by age group, with older kids participating on a regulation sized goal, while the younger kids played on a 9-foot goal.

Skinner said when it comes to organizing a basketball camp, he doesn’t just want it to be about pick-up games.

“For summer camp, I don’t want this to be a situation where it’s like going to the rec center and they play in a gym all day,” Skinner said. “I want them to get something from it and we try to make sure we implement both skills and competition. One thing about basketball is there are a lot of things where you can do a lot of drills but until you see them in a true basketball situation, you don’t know when to use them.”

Once the fundamental drills were complete, campers then got to face each other in a variety of competitions that Skinner believes are also important.

“The competitions teach kids how to handle results and sometimes it’s humbling to lose and see what you need to work on,” Skinner said. “Even when they win you can still find ways to improve and find things to work on.”

Lastly, Skinner praised the Helena community and the parents who provided the funds for their child to attend the camp.

“The community in Helena and those kids that show up, I cannot express how rewarding it is to know that this community will not only spend their hard-earned money in the summertime, but will entrust their kids to us for four hours a day for four days,” Skinner said. “That speaks volumes to the community. We have really good kids up here and it’s very rewarding and humbling to teach them.”

In addition to leaving with new skills, campers also got to take home a camp T-shirt for participating.

By GRAHAM BROOKS / Staff Writer HELENA–Entering its fifth season in program history, a lot of changes will be seen... read more