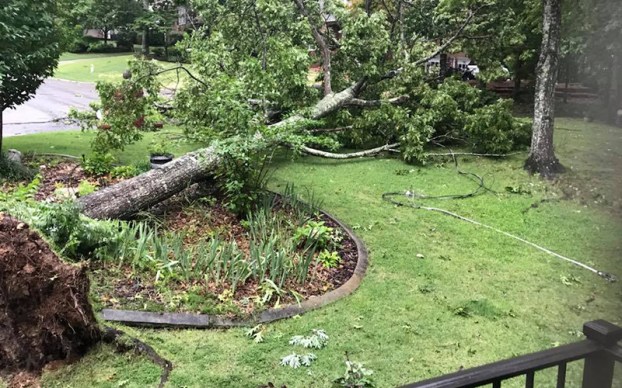 A storm brought high winds to Shelby County on the afternoon of June 28, downing trees and causing widespread power outages throughout the county. (Contributed/Danny Sample)

High-speed wind gusts downed hundreds of trees throughout Shelby County on the afternoon of June 28, causing widespread power outages throughout the county and much of Alabama, and causing Alabama Power crews to work throughout the night in an effort to restore electricity.

A storm front originating in Kentucky and Tennessee reached central Alabama at about 3 p.m. on June 28, bringing with it wind gusts upward of 50 miles per hour, according to National Weather Service Birmingham meteorologist Meredith Wyatt.

“It was a major wind event,” Wyatt said during a June 29 interview. “The wind out ahead of the main line caused a lot of damage. It doesn’t take a lot of wind for trees to bend and snap, so that’s why we saw so many downed trees and limbs across the state.”

The storm met multiple criteria for a severe thunderstorm, prompting the National Weather Service to issue warnings for Shelby County and many other Alabama counties ahead of the front.

“It’s important for people to take those warnings seriously,” Wyatt said, noting these types of storms are not uncommon in Alabama during the summer months.

The winds wreaked havoc on Shelby County’s electrical grid, as Alabama Power crews worked overnight to restore power in affected areas. At one point, about 20,000 customers were without electricity in Shelby County, although the number was down to about 4,300 at 10:30 a.m. on June 29.

The storm front brought a brief reprieve from scorching summer temperatures on the morning of June 29, but the heat was forecast to return later in the day and over the weekend.

“The heat is the big story. More 90s are expected with “feels like” temps over 100. Thousands in Shelby Co. have been without power since yesterday afternoon. Alabama Power is working hard, but damage around the state was extensive,” read a June 29 post on the Pelham Police Department’s Facebook page. “Please check on your neighbors today, especially the elderly, whether they have power or not. Don’t forget about pets, too. If it’s too hot for you, it’s too hot for them!”

By GRAHAM BROOKS / Staff Writer HELENA–Things will be pretty smoky around the Helena Amphitheater the morning of Saturday, July... read more