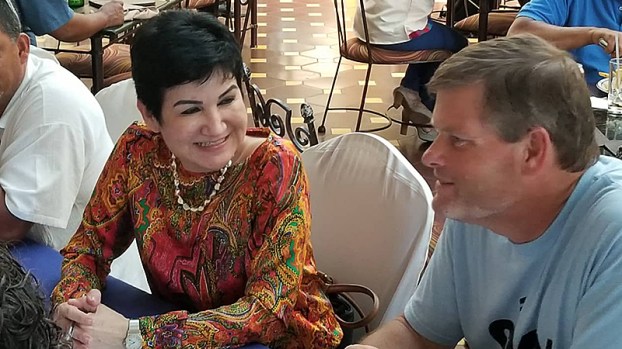 ALABASTER – As Thompson High School pre-engineering teacher Brian Copes and several of his students were preparing to leave Honduras to return to Alabama after a 10-day trip to deliver container classrooms to a village in need, they received a visit from a high-profile member of the country’s government.

Honduran Vice President Maria Antonia Rivera originally was planning to attend the ribbon cutting ceremony for the container classrooms, which were designed by students in Alabaster, Bibb County, Eufaula and Satsuma, but a scheduling conflict prevented her from attending the event in person, instead sending one of her assistants.

“But she made it a point to meet with us before we left,” Copes said. “She is very excited about these projects.”

During the 10-day trip to Belfate, Honduras, which was sponsored by the Skilled Knowledgeable Youth program, Copes and his students delivered container classrooms serving as a welding classroom, a small engine and auto mechanics laboratory, a woodworking laboratory and a computer lab.

“It’s like an instant vocational school,” Copes said. “We are giving the students there training opportunities they’ve never had.”

Copes said much of the industrialized world is rapidly shifting toward mechanized labor, meaning much of the workforce could be replaced my machines and computers if they don’t have trade skills. In developing countries such as Honduras, the problem is exacerbated because much of the nation’s youth have poor educational prospects.

“It leads to a huge separation of classes there,” Copes said.

In addition to delivering the container classrooms, the Alabama group also worked to set up a sister schools program in Belfate, which will allow students there to learn from teachers in Alabaster via webcam.

“It’s really easy for us to turn on a webcam while we’re teaching. That’s the same way a lot of the international automakers in Alabama conduct business,” Copes said. “And at the same time, it will make our classrooms global classrooms.”

Copes said Rivera showed great interest in the work the Alabama students are doing in Honduras, and said the Honduran government is looking to replicate the program elsewhere in the country.

“It’s not every day that students get to meet with the vice president of a country,” Copes said. “We couldn’t have planned a more productive trip.”