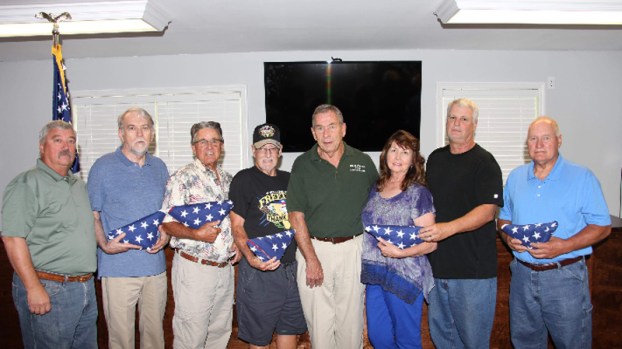 WESTOVER – New American flags will demonstrate Westover’s patriotism for July Fourth thanks to a group of people who recently organized town-wide reunions.

Funds were left over from the reunions, reunion planning committee member Brenda Moorer said, and the group decided to use the money to add to Westover’s collection of American flags that are placed at busy intersections in the town for patriotic holidays.

“We weren’t going to have another reunion for a few years, and we wanted to put the money to good use toward the town itself,” Moorer said.

The reunions in 2015 and 2016 developed on a Facebook group created by Moorer for people who grew up in Westover, after Moorer’s sister, Debbie Marcus, proposed the idea.

“I said, it’s a shame we only get together at funerals,” Marcus said.

Attendance was down for a second reunion the next year, so the committee decided annual reunions would be too frequent.

Sponsorships were sold for the events held at Westover Park, with businesses donating money in exchange for promotion on signage and T-shirts distributed for free to attendees. The funds allowed for organizers to offer the shirts as well as food at no cost, and to enlist a bluegrass band for entertainment and pay for prizes.

“We wanted people to come out and not have to worry about paying for food,” Moorer said.

They are placed at busy intersections, including U.S. 280 at Shelby County 55 and Shelby County 51, for Independence Day, Memorial Day, Labor Day and Veterans Day.

The flags purchased by the reunion committee were donated to the town in honor of four veterans that serve on the committee, and one who recently passed away: Harry Dorough, Charles Eggler, Herschel Guthrie, Arnold “Nubbin” Moore and the late Waylon Cooper.

Westover Mayor Larry Riggins said during a ceremonial presentation of the flags to the town on June 23 that he would like to see more residents purchase flags for the town in honor of loved ones who have served their country.

The town’s planning commission is working on a plaque with the veterans’ names that will be displayed in Westover Park.

The flags cost $300 each and were purchased through the company that provided the rest of the town’s flags.

Eggler retired as senior master sergeant after 25 years in the United States Air Force that included stops in Greece, Turkey and Thailand during the Vietnam War.

Though he lives in Prattville, Eggler maintains strong ties to the Westover community where he was raised, including helping plan the reunions.

“It was a pretty neat experience, getting to see all those folks,” Eggler said. “A lot of people came up to me and spoke of my father, what he meant to them.”

Eggler said at first he did not realize the flags purchased with reunion committee funds would be donated in honor of the committee’s veterans.

“We just wanted to assist the city with the flag display,” he said. “It seemed like a good community activity.”