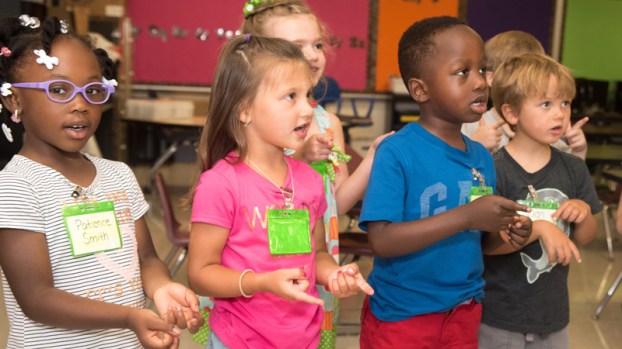 NORTH SHELBY – The first day of kindergarten can be a harrowing experience for children and their parents, but a summer camp hosted by Oak Mountain Elementary School gives the students more confidence.

OMES teacher Amanda Johnson said there have traditionally been transitional programs for students advancing from elementary school to intermediate, and intermediate to middle school, but there was nothing in place for kindergarteners until the camp was proposed and Principal Debbie Horton supported the idea.

“If we can address those issues now instead of when school starts, it takes some pressure off,” Johnson said. “It takes out that anxiety of a new situation.”

Camp attendance is not mandatory for soon-to-be kindergarteners, but the school administration tries to spread out the children who did attend among the kindergarten classrooms.

“They act as leaders because they’re more familiar with routines and procedures,” said teacher Jennifer Slovensky, who organizes the camp along with Johnson and Melanie Fitzmorris.

Four sessions camp were held at OMES this summer, with a total of about 60 children participating. A camp was also held at another school other than OMES, Chelsea Park Elementary School, for the first time.

Oak Mountain Elementary School has about 160 kindergarteners each year.

Parents drop off and pick up their children like they would for a school day, and the students learn their way around the school, their teachers and what will be expected of them, such as walking down the halls in an orderly manner, restroom visits and the lunch process.

Pictures of the students are taken, and later in the week they decorate a frame for the picture to take home to their parents.

Charles Fuller Jr. seemed to have found his favorite part of the camp when the children spent time with the school’s music teacher on Wednesday, June 27.

“I like the songs and the music,” Fuller said and added that he had learned an important lesson during the camp: “You’re supposed to say ‘please.’”