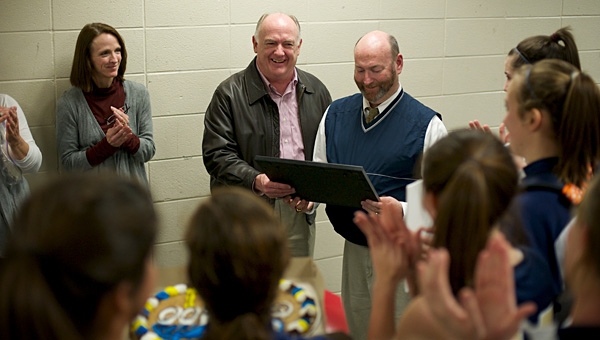 Briarwood's Jim Brown is celebrated in 2011 after a milestone win. After passing away on Monday, July 2, 2018, Brown was celebrated again for the impact he had on so many. (File)

NORTH SHELBY – In front of nearly 200 family members, a celebration of life took place at Briarwood Presbyterian Church on Thursday, July 5, to honor the special person Briarwood Christian School’s Jim Brown was and will eternally be.

Those family members included blood relatives, colleagues, friends, coaches and his current and former players, all of whom he impacted at some point during their lives.

“He always cared so much for our family and everyone else,” said Brown’s daughter Carleigh Brown. “We have grown to realize that every single one of you in this room are just as much family as we are here. He left marks on so many that he doesn’t even realize, but that man’s legacy will live on for so many years to come.”

As a coach and teacher at Briarwood Christian School for 35 years, he was introduced to so many people from all walks of life, all of whom repeated the same sentiment, that he cared about them and what he was doing.

It was a passion for sharing the word of the Lord, impacting young people and teaching what he loved that drove Brown to be the person he was, and something he wouldn’t have even considered doing anywhere else other than Briarwood.

After winning his 500th game at the school this past year with a 48-30 win against Calera, it wasn’t the 500th win itself that made it a special moment saying “It’s just a sign of getting old,” but instead the place he picked up the win that brought him to tears and emotion saying “I’ve been given the chance to work with some really good people. This is the only place I have ever taught and the only place I’ve ever wanted to be. That’s what makes this moment so special.” 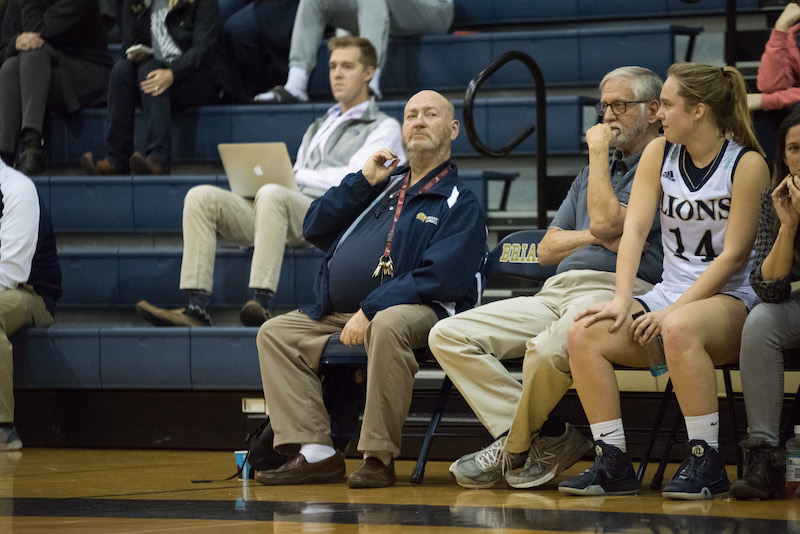 Brown during the game before his 500th win at Briarwood.

It was that passion for BCS that he carried in his everyday life, which led to the impact he had on others without even realizing it, even with what many assume is a coach’s worst nightmare, the referees.

Many high school basketball referees were in attendance to honor Brown, including Ron Craddock, who shared several special stories.

Two of the stories gave some comedic relief as Craddock brought up Brown’s antics of joking with the officials about different things to get calls to go his way, but the third story was one that shows the level of impact Brown had.

“Briarwood was on the road for a basketball game and I was part of the officiating crew,” Craddock said. “I drove my new car to the game and was getting ready to leave and it is raining buckets. I got to my car and had a flat tire. I thought, ‘gah what am I going to do?’

Craddock started to change his tire, but one lug nut was struggling to come off.

“It was raining so hard, that I didn’t even hear coach Brown walk up,” he said. “He got off the bus, came up to me and said ‘let me give you a hand.’ I tried to tell him to let me handle it, but he insisted on helping me. Helping me change the tire was one thing, but when I looked over his shoulder and saw those basketball players watching him provide that service, I realized he didn’t stop teaching them just because the game was over. To this day, that still affects me.”

That one service Brown provided impacted at least one of the girls on that bus that will remember that moment and carry it on as a lesson to teach her children, who then could grow up with a similar desire to do good just as Brown did.

That was just one day out of the 35 years he spent at Briarwood setting that example. In a total of 12,775 days, he had that same opportunity to make an impact throughout his career.

With all of the family members, students, co-workers, officials and coaches he had an impact on, Brown’s legacy isn’t one that is gone, but one that will live on eternally with the way people he impacted share his wisdom.

“We selfishly know that he left way too soon,” Carleigh Brown said. “My dad, our dad, is easily one of the greatest men to ever live and we were all lucky enough to know him. Heaven gained the most beautiful angel and we all miss you very, very much. But today we celebrate your return home. So it’s not goodbye daddy, it’s just see you later.”

With current and former players and students asked to stand if he had an impact and others asked to raise a hand if they had an inspirational story to share. After that, nearly all of the close to 200 people in the room had either stood or raised their hand during the service.

Dr. Rob Richey, who gave the Ministry of the Word and is a teacher at Briarwood, jokingly talked about always being able to find Brown because of the peanut shells he left everywhere due to his love for peanuts.

Born July 4, 1955, and passing away July 2, 2018, Brown left a lifelong path of peanut shells that will now be followed for generations to come by the thousands of people he impacted throughout life.