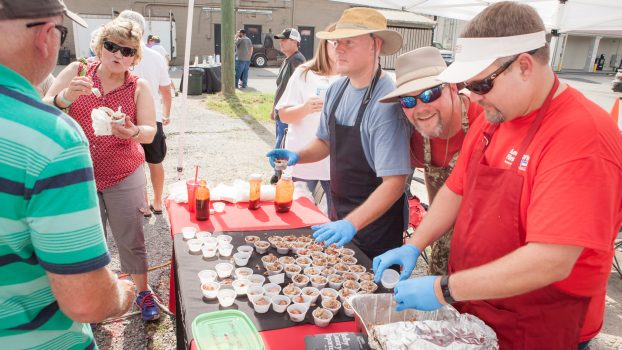 The SCAC's annual Shelby County Shindig will take over downtown Columbiana and feature an afternoon of barbecue tasting and live music on July 14. (File)

The Shindig will feature a variety of food and beverages and live music. The Columbiana Fire Department will offer visitors the chance to cool down at one of their misting tents, and inflatables will be onsite for kids.

“If you’re looking for something down home, a little smaller scale, we would recommend the Shelby County Shindig,” Andrews said.

The gates to the event will open at 12:30 p.m., and live music will start an hour later. John Bull and Ed Pickett will take the stage at 1:30 p.m., followed by the Little G Weevil Band at 3 p.m. The artist of the event, the Arretta Woodruff Revue, will begin performing at 4:45 p.m.

The public tasting will start at 4 p.m., and will feature barbecue from a variety of local teams who will compete for trophies as cash prizes. Andrews said the judging is done “blindly,” and the winners will be announced at 6:15 p.m. The public tasting is open to those who have purchased tickets.

“The barbecue and sauce are all tasted without them knowing whose it is,” Andrews said.

Andrews said the Shindig will be held on the same day as the Shelby County Grand Prix, which will be held earlier that morning, and encouraged visitors to check out that event as well.

“We’re working with them to promote each other’s events,” Andrews said.

A $2 donation for general entry is suggested, and full event tasting tickets cost $10. Andrews said the proceeds raised by the Shindig will benefit the SCAC’s outreach programs, including the Artabilities program, the Writing Our Stories program and the Juvenile Detention Arts program.

In addition to raising money, Andrews said he hopes this year’s Shindig will also serve as a way to highlight some of the things that Columbiana has to offer.

“Hopefully, we can draw people to Columbiana so they can see what a beautiful place this is,” Andrews said.

The Shelby County Shindig’s title sponsors are DeLoach, Barber and Caspers, PC and America’s First Federal Credit Union. For more information about the event or to purchase tickets, visit Shelbycountyshindig.com.