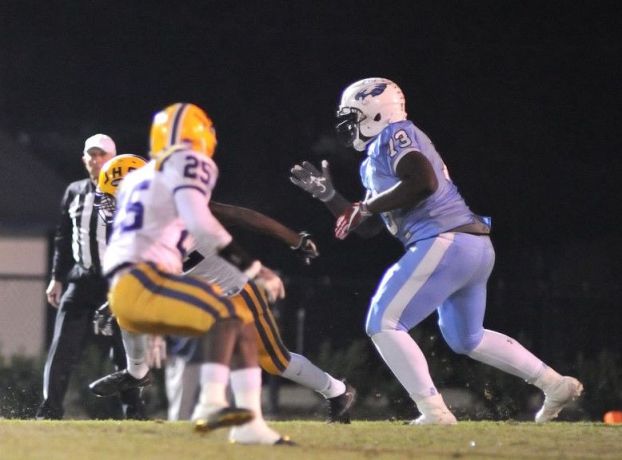 Jayson Jones, the state’s top 2020 recruit, recently announced his commitment to the University of Alabama. (File)

Calera’s Jayson Jones commits to Alabama with some comedic relief

CALERA – The state of Alabama’s No. 1 recruit for the class of 2020 has made his college commitment along with a little comedic relief on Monday, July 2, via a YouTube video posted to Twitter.

Jayson Jones, a rising-junior defensive tackle at Calera High School, is rated a four-star recruit and is currently slotted as the No. 1 recruit in the state due in large part to his frame of 6-foot-5, 322 pounds.

In his video, Jones talked about change and creating his own path after growing up in Alabama his entire life before then putting on a Georgia Bulldogs hat and saying “Go Dawgs” followed by barking from his teammates who surrounded him.

Then suddenly, in the middle of the video right after the barking stopped, the screen went to static and transformed to the couch of Jermaine “Funny Maine” Johnson—known for the YouTube show “How Bama Fans Watched”—who proceeded to say, “Hold up, hold up. Y’all didn’t think he was gonna leave the state did you?”

Johnson then put on a houndstooth hat and said, “Nah, Roll Tide.”

The video then flashed back to Jones putting on an Alabama hat and saying “Roll Tide,” before his teammates then start jumping up and down around him, this time for real.

The comedic aspect of the video caused a few upset Georgia fans, but for the most part, the Twitter reactors thought it was hilarious and a clever way for a talented young man to make an important announcement.

Jones still has two full seasons to play at Calera, before his focus can completely shift to the next level, but that is still time to improve his game to be the best he can be against SEC competition.

He’s got the frame to be an incredible lineman, and with the intangibles already there, two more years of playing at the high school level should turn him into one of the country’s most elite players.

Jones has made it clear that he wants to be in the NFL someday, and knows the hard work and dedication that is ahead of him on his path, but for the time being, he can celebrate the fact that he has earned a milestone that not many in the country do and that’s to play football in the SEC at a school that has become known as a dynasty.