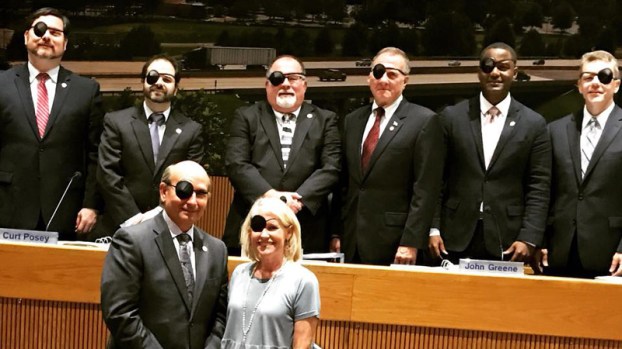 HOOVER – Mayor Frank Brocato and the Hoover City Council donned eye patches during the Council’s meeting on Monday, July 2, as part of the “Eye Patch Challenge” to increase awareness for ocular melanoma.

Allyson Allred, a Hoover resident who has been diagnosed with the rare disease, approached Brocato about the Challenge and addressed the Council.

“She is at the forefront of trying to address this disease, of trying to raise funds for research,” Brocato said. “She is a Hoover mom and wife, and their kids all went to Spain Park.”

Allred said she was diagnosed in 2001 and told that five people out of 1 million contract the cancer. However, she told the doctors that she knew two others who had been diagnosed.

“They were stunned and said this should not be,” Allred said.

Though not yet scientifically labeled as a cancer cluster, through networking Allred and others discovered that about 36 graduates of Auburn University between 1985 and 2000 were diagnosed with ocular melanoma.

Since the form of cancer is relatively rare, funding is needed to research the cause in the Auburn cases.

“We need to raise $135,000 to begin the research, and we’ve raised about a tenth of that since May 19. We have everything in place ready to go as soon as the funding comes in,” Allred said and added that doctors are confident that if the cause of the cancer is discovered a cure would follow.

The Eye Patch Challenge is intended to help raise the money, as someone who is challenged must take a video of themselves at work or play wearing an eye patch, post the video to social media, challenge three to five friends and then donate to the cause.

More information about ocular melanoma, the Auburn victims of the disease and the challenge can be found at EyePatchChallenge.org.